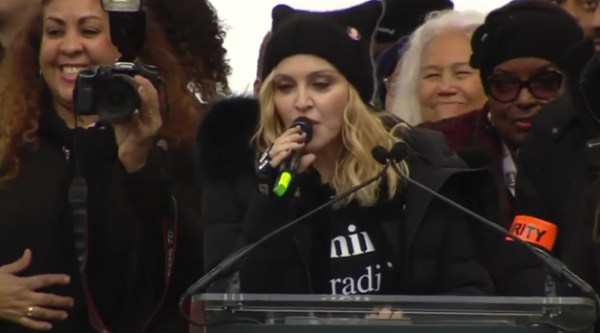 The U.S. Secret Service will reportedly open an investigation into Madonna after the singer told demonstrators at the Women’s March on Washington Saturday that she has often thought of “blowing up the White House.”

(Article by Daniel Nussbaum from Breitbart.com)

During a profanity-laced speech at the protest rally in Washington, D.C. Saturday, the 58-year-old “Rebel Heart” singer said she had felt “angry” and “outraged” over Donald Trump becoming the country’s 45th president.

“I’m angry. Yes, I’m outraged. Yes, I have thought an awful lot about blowing up the White House,” Madonna said. “But I know that this won’t change anything. We cannot fall into despair.”

A spokesman for the Secret Service reportedly told The Gateway Pundit that the agency was “aware” of the singer’s comments and would open an investigation, though the final decision on whether to prosecute would be made by the U.S. Attorney’s office.

Madonna performed two songs during her appearance at the Women’s March, “Express Yourself” and “Human Nature.”

During “Human Nature,” the singer changed the song’s lyrics to include “Donald Trump, suck a d***.”

Madonna was one of Trump’s biggest celebrity antagonists during the election. In October, the pop star offered to perform oral sex on anyone who voted for former Democratic presidential nominee Hillary Clinton.