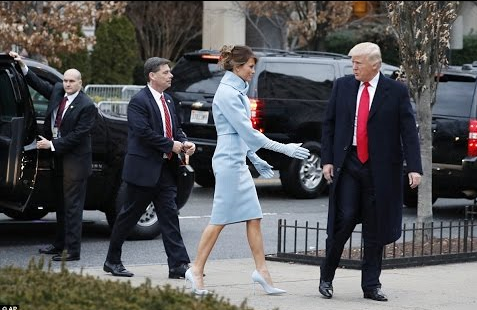 As he said he would during his campaign, President Donald J. Trump and his new administration wasted no time getting straight to work on his first day in office.

As reported by the UK’s Daily Mail, Trump—in between his inauguration and post-inauguration celebrations and festivities—took time out in the Oval Office to sign an executive order and a piece of legislation, as two of his Cabinet picks were confirmed by the Senate.

His very first official act was to sign an order confirming retired Marine Gen. James “Mad Dog” Mattis as his secretary of defense, while the second act was signing an executive order to “ease the burden of Obamacare,” which was not defined.

Prior to signing his first documents as president, some changes had already been made to the Oval Office. Former President Obama’s crimson drapes had been replaced by gold curtains, while a bust of former British Prime Minister was returned as well. Upon his taking office, Obama had replaced the bust of Churchill with one of Martin Luther King, Jr.

The new president’s Obamacare order directs every federal agency that is responsible for implementing and/or enforcing provisions of the Affordable Care Act to grant waivers, deferments, delays and exemptions so as to minimize or eliminate any costs associated with the implementation of the outgoing president’s signature legislation. (RELATED: See what else the new administration does to neuter the bureaucracy at BigGovernment.news)

In addition, the order directs federal agencies to go to any lengths to “provide greater flexibility to States and cooperate with them in implementing healthcare programs.”

Also, the order gives weight to Trump’s often-stated objective of getting rid of geographic boundaries that allowed for state-centric health insurance monopolies, stifling competition and keeping prices artificially high in many cases. The order directs federal bureaucracies to “encourage the development of a free and open market in interstate commerce for the offering of healthcare services and health insurance, with the goal of achieving and preserving maximum options for patients and consumers.”

As Trump.news reported earlier, the new president also plans early action on another major campaign pledge: Beefing up security along the porous U.S.-Mexico border, in advance of building a wall all along the boundary and getting Mexico to pay for it.

One of the steps Trump plans to take is to issue an executive order reversing President Obama’s unconstitutional action that protected people in the country illegally, mostly by preventing them from being deported. According to advocates of enforcing immigration law, as well as those familiar with Trump’s plans, say in place of Obama’s actions, there will likely be raids on workplaces and other tough measures as the president wastes little time in keeping his pledge to the American people. (RELATED: Stay current on the administration’s moves against illegal immigration and other policy issues at Whitehouse.news)

In addition to the confirmation of Mattis, the Senate also gave its ascent to former Marine Gen. John Kelly to be Trump’s secretary of homeland security. Both men were sworn by Vice President Mike Pence.

Prior to Inauguration Day, Trump and his transition team had signaled that the new chief executive would be busy early on. His first full day in office is Monday, and reports said he will visit CIA headquarters in Langley, Va., perhaps in an effort to patch up what has begun as a nasty public dust-up between top-level careerists within the intelligence community whom Trump has accused of trying to delegitimize his presidency.

But on Saturday, Trump and the first lady joined Pence and his wife, along with the Trump children, at the Washington National Cathedral at 10:30 am to take part in the post-inauguration tradition of attending church services there. It marked the second time the first and second families had worshipped together.