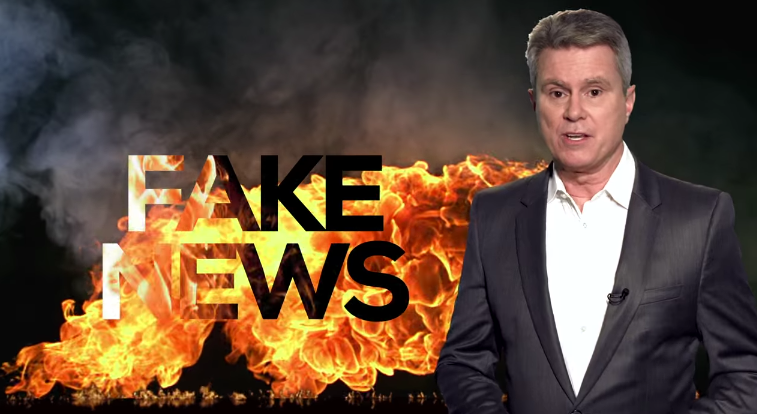 Following the presidential election in November, the freaked-out ‘mainstream media’ invented a narrative that scores of alternative news sites published a number of “fake news” reports fed to them by Russian propagandists, this site included.

Since then, of course, many of those same outlets have continued to publish fake news or, at a minimum, push a fake narrative that they manufactured out of whole cloth, just to superimpose their Left-wing agenda onto the daily news cycle.

But one of the most heinous of all media ‘crimes’ are when MSM outlets push made-up “hate crimes” that turn out to be nothing of the sort. And in fact, as we saw recently in Chicago, it’s very likely that pushing phony hate crimes stories is having the effect of causing the ill-informed to act out, believing it’s some sort of retribution largely against Caucasians that is justified.

One of the biggest recipients last year of hate crimes hoaxes was President-elect Donald Trump. To wit:

— ‘Vote Trump’ black church arson: In the days before the Nov. 8 election, a historic African-American church in Greenville, Miss., was set on fire, gutting the institution making it a total loss. The alleged perpetrator even left a spray-painted message on the scorched brick: “Vote Trump.”

Well, that’s proof that a white, angry, bigoted, racist Trump supporter was the culprit, right? Only it wasn’t. In fact, as Bugout.news reported, the suspected arsonist was not only black but a member of the same church he allegedly burned up. And, we presume, not a Trump supporter.

— The lying hijab: A female college student from Lafayette, La., filed a complaint with local police claiming that two men attacked her and robbed her of her wallet and hijab, the head covering that Muslim women wear. She also claimed that they shouted racial slurs at her and that one of the alleged attackers was wearing a Donald Trump hat.

Didn’t happen. In fact, the woman wound up facing criminal charges herself for filing a false report.

— Black woman ‘harassed’: A black woman’s story about how a group of white, male Trump supporters harassed her at a gas station in Delaware went viral after she posted the alleged incident on Facebook. Then police began investigating, then suddenly she deleted her post and recanted her story.

And police said, according to this report, she never even filed an official report.

— The gay Canadian: A gay filmmaker from Canada claimed that he was assaulted by a gaggle of Trump supporters on Election Day. He claimed that the attackers shouted abusive slurs at him earlier in the evening at a bar, before he was then beaten in a nearby alleyway. As ‘evidence,’ he posted a bloodied picture of himself in an emergency room, saying the attackers smashed a beer bottle over his head and shouted a number of homosexual slurs.

Except that the whole story was a lie. The filmmaker, Chris Ball, never filed a police report, according to Santa Monica Police Department officials, and a police investigation revealed there was no record of Ball being treated at a local emergency room, as he claimed. So, with no official record of the “assault by Trump supporters” and no official hospital record, one can only assume this is a hoax as well.

— Trump supporters hate Muslims: Another alleged incident involving an 18-year-old Muslim woman, this time in New York City. She claimed that she was attacked by a trio of drunk males who screamed “Donald Trump!’ and called her a “f**king terrorist,” admonishing her to “get the hell out of the country.” She said they tried to pull at her handbag and yank her hijab off of her head.

But not only was this a lie, it turns out she told it as an excuse to avoid the wrath of her parents for being late for curfew.

Side note: The Washington Post, itself one of the biggest creators of fake news, described her faked incident in this way:

The highly publicized incident bore many of the same hallmarks as scores of other anti-Islamic hate-crime incidents reported in the wake of Donald Trump’s November victory in the presidential election.

— The Swastika hoax: We’ve been told repeatedly throughout the campaign that Trump and his supporters were Nazis, so it only figures a couple of those knuckleheads would act like Nazis at some point, right?

Two Northwestern University freshmen were accused of spray-painting racist, homophobic graffiti, along with Trump’s name, inside the university’s chapel, accompanied by some other derogatory things defacing photos of Muslim students and the word “God.”

The obvious implication was that the graffiti was intended to make it seem as though the accused were Trump supporters, even though news stories do not specifically state this. But that’s the only reasonable explanation for why the two students would even mention our new president.

The found nothing. In fact, they discovered that those “threats” were fabricated.

— Trump hates Latinos too: Anti-Latino graffiti at Elon University stating, “Bye Bye Latinos Hasta La Vista,” was actually spray-painted by a Latino student, who later tried to claim it was all just a “joke.” And of course, the mainstream media jumped right on the story before looking into its veracity. As usual.

— But he LOVES the KKK: Police said that a black man faked a hate crime, then set his girlfriend’s car on fire and staged his own kidnapping, using his own blood to write “KKK” and “Trump” in a bid to throw detectives off the trail of his deceit.

— ‘Rock’-ing it for Trump: A black, female student attending Bowling Green State University said that white male students wearing Trump shirts launched rocks at her and yelled the typical racial slurs that you hear about the day after Trump won the election. But, as police found out, she wasn’t even in the location she claimed to be in, and she regularly changed her story.

— Hillary Clinton gets involved: After three black students claimed to have been attacked by some white guys on a bus, a number of protests broke out and there was outrage expressed all over social media and their campus, the University of Albany. The alleged incident even earned a shout-out tweet from Democratic nominee Hillary Clinton.

Uh, but in reality, the three black students were the aggressors, and teamed up to harass a 19-year-old white female.