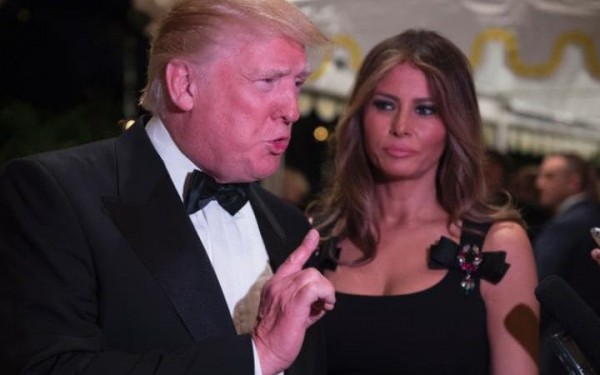 President-elect Donald J. Trump went to Washington Thursday to make the rounds visiting officials and thanking his congressional allies during a luncheon at the Capitol City hotel bearing his name, after completing his Cabinet selections by asking Georgia Gov. Sonny Perdue to head up the Department of Agriculture.

As reported by Fox News, the incoming president got to Washington shortly after noon local time, arriving at Joint Base Andrews in Maryland. Trump was joined by his wife, soon-to-be first lady Melania Trump, as well as other members of his family as he got ready to attend an afternoon of pre-inaugural events.

The president-elect’s first stop was his hotel along Pennsylvania Avenue. There, he received a standing ovation from staff and praised House Speaker Paul Ryan, R-Wis., while touting his Cabinet team as having the “highest IQ” of any that came before them.

“Our beachhead teams are ready to land,” he said, eliciting some chuckles when he added that the transition was “on schedule and under budget.” [RELATED: Keep up with the Trump administration at Whitehouse.news]

Those teams are comprised of 536 temporary employees that serve as assistants to the secretary-designates. They can serve up to 120 days, Fox News reported, at which point they will either be retained or dismissed.

“We are all ready to go to work. In fact, we can’t wait to get to work for the American people to make America great again,” Pence added.

At the same press briefing, incoming White House Press Secretary Sean Spicer said a number of Obama administration officials occupying critical positions would stay in place, including Deputy Defense Secretary Robert Work, U.S. Envoy for Countering ISIS Brett McGurk and Undersecretary of State for Political Affairs Tom Shannon, identified in a previous, tasteless CNN report as the person who would take over as president should Trump be killed prior to being inaugurated.

Secretary of Housing and Urban Development nominee Dr. Ben Carson, Attorney General nominee Jeff Sessions and longtime Trump advisor and former New York City Mayor Rudy Giuliani were seated at Pence’s side as he spoke. The VP-elect told reporters his primary role was to offer thanks to “the team that got us here to this day at the direction of the president-elect.”

“When you see a box turtle on a fence post, you know he had some help getting there,” Pence said.

Trump expressed hope that several of his Cabinet picks would be confirmed on Friday shortly after his inauguration and his official swearing-in as the 45th president. Several of those nominees including Defense Secretary pick Gen. James “Mad Dog” Mattis and Secretary of State selection Rex Tillerman have already had their confirmation hearings and are awaiting votes by the full Senate.

During his comment period, Spicer criticized Democratic senators including Minority Leader Charles Schumer, D-N.Y., for threatening to hold up some of the votes, as well as some of the nonsensical, unserious questioning of nominees thus far. He added there was “no excuse” for he called “delay tactics” and “partisanship.”

That isn’t sitting well with Senate leaders, especially since Republicans—who were in the minority at the time—did not delay President-elect Obama’s Cabinet picks.

“When President Obama was elected, Republicans and Democrats worked together and expeditiously to carefully consider his nominees. The Senate held hearings on multiple nominees before he was even sworn in,” Don Stewart, a spokesman for Senate Majority Leader Mitch McConnell, told CNN. “Sen. Schumer and others approved wholeheartedly of this approach at the time, so it’s surprising that they’d object to treating the incoming president’s nominees with the same courtesy and seriousness with which the Senate acted on President Obama’s nominees.”