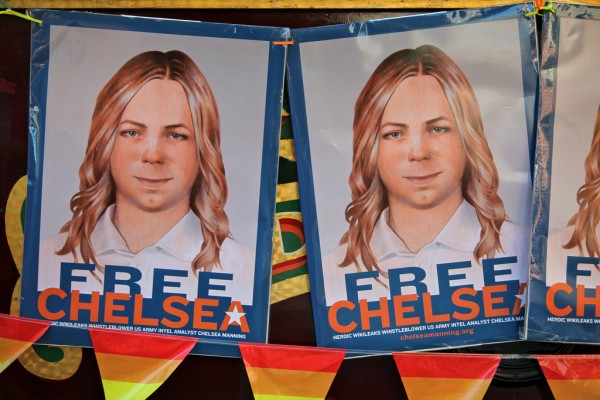 President Obama has commuted the majority of the remainder of Chelsea Manning’s prison sentence. Manning was sentenced to 35 years in prison for leaking 750,000 military files, documents and communications which exposed worldwide U.S. operations to the controversial, yet informative publication, WikiLeaks. Chelsea Manning is a transgender woman formerly known as Bradley Manning. The former U.S. Army intelligence analyst has been imprisoned since 2010, but was sentenced in 2013. The whistleblower is scheduled to be released from a Fort Leavenworth Military Prison on May 17, 2017, a full 28 years ahead of her originally scheduled 2045 release date.

Some of the controversial material that Manning spilled the beans about included revealing a significantly higher civilian death count in Iraq and Afghanistan than the numbers which were reported by the Pentagon. Manning also leaked a video showing a U.S. Apache helicopter gunning down journalists in central Baghdad. Manning underwent the military criminal justice process, was found guilty, and acknowledged her wrongdoing.

Although Manning’s sentence has been commuted, she still sets the record for time served for leaking classified information to news organizations. Manning spent the first 11 months of her time in solitary confinement. She was denied medical care for gender dysphoria until she went on a hunger strike, when the Army finally allowed her to consult a surgeon for gender-affirmation surgery. Manning was later readmitted to solitary confinement for attempting suicide.

A recent press release by the White House named over 200 prisoners who are to receive reduced sentences. Midway through the list was Manning’s name. Obama, who set the record for granting more sentence commutations than any other president, did not immediately comment about his decision to release Manning.

Manning’s lawyers and many human rights activists have welcomed the decision. Chase Strangio, a lawyer with the ACLU, believes that the decision quite possibly saved Manning from further suicide attempts and a lack of proper healthcare. Strangio believes that we are better off knowing Manning will walk a free woman, dedicated to fighting for justice and making the world a better place. Human rights groups believe that Obama’s decision sends a message that the U.S. government is serious about investigating human rights violations rather than punishing the messengers who expose such violations. (RELATED: Find more stories from independent media at Censored.news)

White House spokesperson, Josh Earnest, had recently hinted at clemency for Manning, but was not open to discussing such last-minute clemency for other popular whistleblowers. Earnest said that Edward Snowden, who blew the whistle on the NSA, exposed far more dangerous and serious material. Snowden remains in Russia dodging espionage and theft charges. James Cartwright, who was also listed on the presidential pardons list, is a retired general who pleaded guilty for lying to federal investigators who were probing leaks to journalists regarding the U.S. government’s use of Stuxnet, a computer virus that targeted machines inside an Iranian nuclear enrichment facility. (RELATED: find more White House news at WhiteHouse.news)

Obama’s pardon of Manning might have an ulterior motive. WikiLeaks founder, Julian Assange, indicated that he would turn himself in if Manning was released. Assange’s lawyer has called for an end to the government’s war on whistleblowers and publishers. It remains to be seen whether Assange will make good on his word and surrender, but his lawyer Melinda Taylor, has confirmed to news organizations that Assange will indeed do so. (RELATED: find more whistleblower news at Whistleblower.news)

Paul Ryan has been vocal about his belief that Obama is setting a dangerous precedent by releasing Manning, whose actions put American lives at risk.

Obama addressed the press on Wednesday, stating that he was comfortable with what he described as an “appropriate” commutation. Obama argued that Manning had already served a tough, but adequate prison sentence. “I feel very comfortable that justice has been served,” Obama told the press. The president refused to comment on Assange’s recent twitter post, in which he agreed to turn himself in in exchange for Manning’s pardon. “I don’t pay a lot of attention to Mr Assange’s tweets,” said Obama, who referred the matter to the Department of Justice.