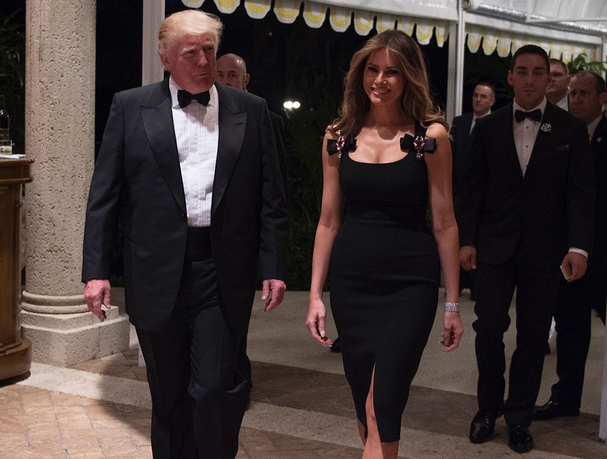 Will Dolce and Gabbana be the ones dressing Melania Trump for the inauguration later this month? It seems a fair bet, if the events of the last few days are anything to go by.

For her New Year’s Eve celebrations in Palm Beach, Florida, the soon-to-be First Lady chose a £1,950 little black dress from the Italian label’s Cruise collection, with matching jewel brooches on the shoulders. And while many designers have so far remained quiet when Melania has chosen to wear their clothes (with some even suggesting that she bought them off-the-rack, and therefore without their consent) Stefano Gabbana was quick to take to Instagram to express his pride in dressing the incoming FLOTUS.

But simply posting his thanks to Melania and declaring her to be a ‘#DGwoman’ was enough to start rows on the social media platform, prompting over 1,000 comments from the designer’s followers and fans.

“You should know stefano that OUR election has torn apart our country,” wrote one particularly angry follower, who along with several others, suggested that Mr Gabbana wouldn’t understand the political sensitivities of dressing Melania. “…If it were Mrs Reagan, Bush or Obama (either party) no one on either side would mind. But this is offensive to the core…”

Melania has, of course, worn pieces by a whole mix of different international designer names to date, including Roksanda, Roland Mouret and Ralph Lauren. But few have chosen to publicly thank Mrs Trump on social media as would these days be a PR custom when a well-known woman has stepped out in a designer’s outfit. In this particular public figure’s case, the stakes are a lot higher, and several brands are scared to align themselves in any way with Trumps’ controversial new government, either because they themselves supported the Democrats, or they worry that a large portion of their customer base did. 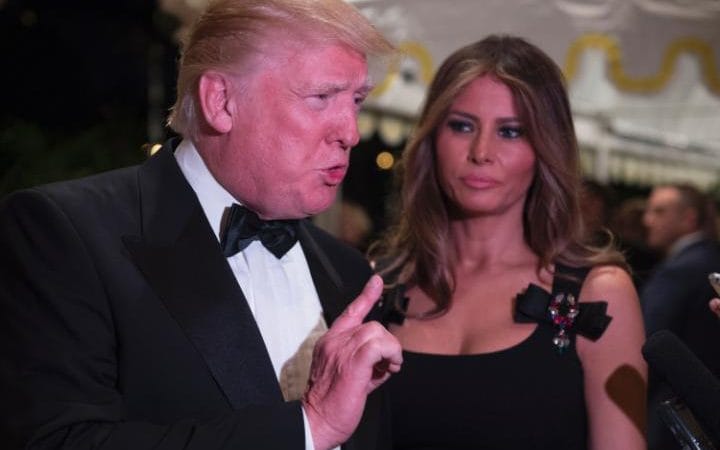 Many designers have spoken out about their opposition to dressing Melania Trump. Credit: AFP/Getty Images

While many designers are still on the fence, choosing to stay silent at this stage, several of the American fashion industry’s biggest names, including Marc Jacobs and Tom Ford, have already been vocal in expressing that they will never want to dress Melania. “Personally, I’d rather put my energy into helping out those who will be hurt by [Donald] Trump and his supporters,” Jacobs said.

54 year-old Gabbana, who is a very active Instagram user and will often respond to messages and pictures from fans, was quick to jump to Melania’s defence, trying to separate fashion and politics for his followers.

“How many stupid and ignorant people r on instagram!!!!” he wrote after uploading his initial picture. “Please if you dont like my post unfollow me … thank u ❤” 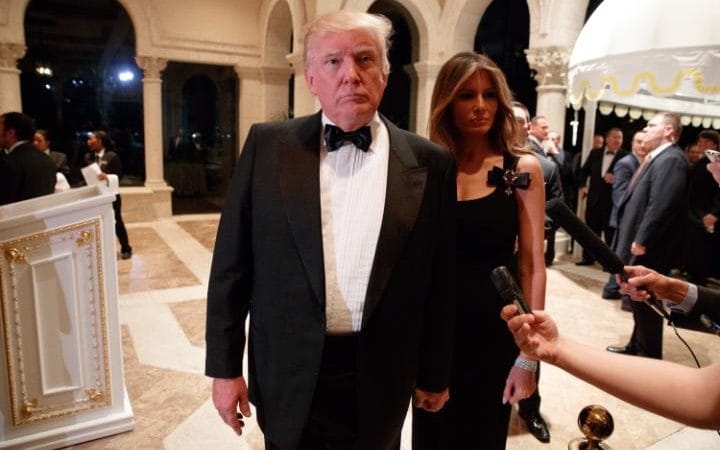 Donald and Melania Trump arrive at the party. Credit: AP

He also called out one particularly persistent commentator, telling them “please you dont buy anymore my fashion please!!! I dont need a ignorant costumer!!!” before adding that he sees it as “just 1 dress” and therefore not a political talking point.

Other fans reversed the debate and were more keen to insist that Melania should always wear American designer brands, while others simply showed their support for Stefano’s decision to dress Melania. “I love how you are bold enough to post the picture. Ignore the hateful people,” wrote @couturerents. “I follow you here because you’re LOTS of fun and your work is amazing,” reasoned @jaciaracarneiro. “I don’t like Trump but I like fashion. And US first lady is stunning.”

Having had a taster of just how divisive it can and will be to dress Melania, it will be interesting to see if Dolce and Gabbana would be happy to weather the storm that whoever designs the inauguration dress will face on social media.

The design duo’s  feminine and decorative designs work well with Melania’s ladylike style. “Clearly, her clothes will cling in the right places, accentuate her figure and her model-style long tresses. Get ready for super-cinched waists, hourglass silhouettes and pencil skirts,” Andre Leon Talley, the American Vogue editor who befriended Melania after travelling with her to Paris to choose her wedding dress, said of her look recently. That said, something tells us that Stefano Gabbana is not one to let the Insta-critics get him down so this is unlikely to be the last time we see the future FLOTUS dressed in Dolce and Gabbana.

Domenico Dolce and Stefano Gabbana met in a nightclub in Milan in the early 1980s. At the time, Dolce was working for designer Giorgio Corregiari and helped Gabbana get a job at the same company. They established their design house together in 1985, opening their first shop a year later. Those first shows were far from the high-octane spectacles of today; they couldn’t afford to hire models so asked their friends instead. In 1991, they won the prestigious Woolmark prize and by the end of the 90s were turning over millions.

Dolce and Gabbana gained a reputation for their reimagined takes on Italian cinematic classics with fashion insiders, but their big breakthrough moment on the world fashion stage came when Madonna wore one of their bejewelled corsets on the red carpet at the Cannes film festival in 1990. The duo went on to design thousands of costumes for the star over the coming years.

Molto, molto, molto! Dolce and Gabbana are renowned for their glamorous and ultra-feminine designs which are often inspired by Italian and Sicilian culture and history. Think slinky dresses, wasp-waisted pencil skirts and maximalist accessories. Cheerful prints are another mainstay of every Dolce and Gabbana collection.

Who has worn them well?

Who hasn’t? Over the years, Dolce and Gabbana have amassed a faithful VIP following which includes Helen Mirren, Julia Roberts and Victoria Beckham. Their most recent Alta Moda show (their take on haute couture) was dedicated to long-time muse Sophia Loren while Madonna is still a fan, choosing their playful prints to wear for her birthday celebrations in Cuba this summer.

In their own words

“Alta Moda and ready-to-wear are completely different stories. With ready-to-wear it’s about what’s hot now, what’s cool, what message are you trying to get across? You’re always aware that at the end of the day you have to sell a lot of clothes to millions of women.

“(With Alta Moda) You have a direct line to your clients. You know who they are. You’ve built up relationships with them. You don’t have to sell a lot. You just have to keep the client happy, not with messages or trends, but clothes they can wear for every aspect of their lives.”