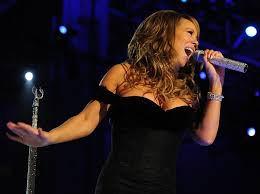 Mariah Carey struggled through her performance on Dick Clark’s New Year’s Rockin’ Eve late Saturday night when apparent technical difficulties caused her audio track to be thrown out of sync.

The 46-year-old pop star stopped singing while performing her hit “Emotions,” asking the crowd to sing the lyrics for her.

The issues appeared to be sorted out during her next song, “We Belong Together,” but she stopped singing midway through as her vocal track played on behind her.

“I’m trying to be a good sport here,” an apparently frustrated Carey told the audience during the performance.

“It just don’t get any better,” she added as her set came to a close and she exited the stage.

Mariah Carey’s disgusted sign off is a perfect goodbye to 2016 https://t.co/Ig35rXICTk

Thousands of viewers at home took to social media to weigh in on the performance, with some saying 2016 had claimed Carey’s career as its “final victim.”

Ohio State should thank Mariah Carey. They no longer have the worst performance of the night. — Dave Zangaro (@DZangaroCSN) January 1, 2017

As CBS News noted, this is not the first time Carey has lip-synced during a nationally televised performance; the singer also mimed her way through the Macy’s Thanksgiving Day Parade in 2015.