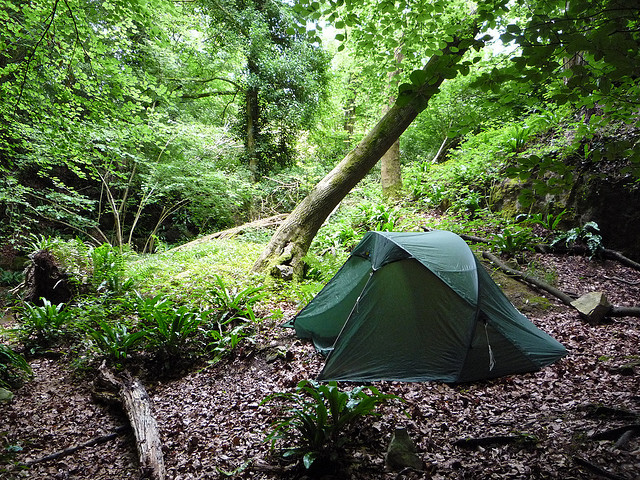 It may be the world’s largest technology giant and retailer, but many of Amazon’s workers appear to be living like they were deployed in a war zone: In tent cities.

As reported by the UK’s Courier newspaper (why hasn’t an American media outlet reported on this—like Amazon founder Jeff Bezos’ Washington Post, which he owns?), which reported exclusively, Amazon workers at one of the company’s England-based fulfillment centers are actually sleeping in tents.

Reporters for the paper recently discovered at least three tents in a wooded area beside the online retail behemoth’s base near Dunfermline, Scotland, which has sparked new concerns that some employees have to sink to depths unheard of for workers of other companies just to survive.

Last month the company came under heavy scrutiny and criticism from local activists who said that some employees at the fulfillment center are working as many as 60 hours per week, and for little more than the going minimum wage. They also said workers were harshly treated in some cases.

As you might expect, Amazon officials have denied those charges, saying they value every employee and try to maintain a “culture of direct dialogue” with workers. But the news that some staff have been forced to live very simply and without modern conveniences as the bitterly cold winter arrives has led to new questions about the health and welfare of Amazon workers at the facility.

In fact, one employee who asked not to be identified in the story was initially reluctant to speak to the paper, but did describe the company as a “poor employer” while criticizing working practices at the site.

In addition, the worker added that he chose to stay in a tent because it was cheaper and easier than commuting back and forth between the facility and his home in Perth, though his tent and camping gear disappeared shortly before the report was published.

But another tent that had been set up appeared to be abandoned, with trash, discarded sleeping bags and cans of drink among the items that were thrown about.

Willie Rennie, MSP, the Scottish Liberal Democrat Party leader, has repeatedly called on Amazon to improve its working conditions and its tax record. He once again criticized the company after being told that some of the fulfillment center’s workers had been forced to live in nearby woods.

“Amazon should be ashamed that they pay their workers so little that they have to camp out in the dead of winter to make ends meet,” he told the paper. He added the company needed to “take a long, hard look” at its business practices.

Company concerned about ‘safety and wellbeing’ of employees?

He also said that the company only pays a small portion of its earnings in taxes, while receiving “millions of the pounds” from the government in the form of subsidies, “so the least they should do is pay the proper living wage.’

Earlier this year, Rennie demanded that Amazon receive no more public funding until executives could guarantee that they would pay their workers higher wages amid reports that some staff were being paid far less than the current living wage.

Amazon employs some 1,500 workers on a permanent basis at the Dunfermline center, but also added another 4,000 seasonal jobs to assist the company with the holiday shopping season.

The company, in a statement, said that it places its employees’ “safety and wellbeing” above everything else, as it creates several thousand new permanent jobs at the facility. And the company also said that it was paying “competitive wages” including overtime pay.

The fulfillment facility in Dunfermline is Amazon’s largest.