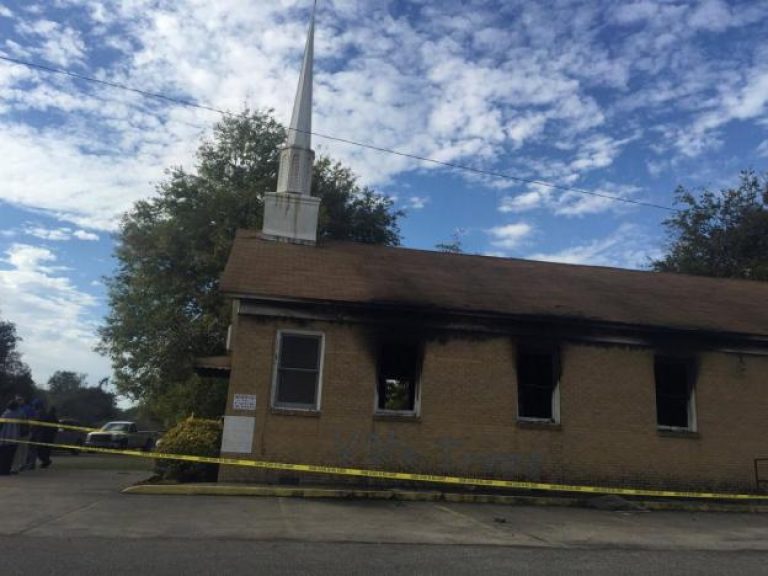 (Bugout.news) During the recently presidential campaign cycle, the Left went apoplectic with rage upon news that a black church in Greenville, Miss., was burned and the words, “Vote Trump,” spray-painted on the outside. Conclusion: More proof positive that supporters of GOP nominee Donald J. Trump are racists and bigots!

Not so fast. Turns out the church burning was actually committed by a black member of the same church.

A black man has been arrested and charged with burning an African-American church in Greenville, Miss. last month and defacing its outer walls with “Vote Trump” graffiti.

The Mississippi state police arrested Andrew McClinton, 45, on Wednesday and charged him with first-degree arson of a place of worship, Warren Strain, a spokesman with the Mississippi Department of Public Safety told The Daily Caller.

McClinton allegedly set first to Hopewell Missionary Baptist Church, where he is a member, on Nov. 1, a week before the election. The fire destroyed 80 percent of the church. A GoFundMe account raised more than $240,000 to repair the facility.

A ‘week before the election…’ Sound like something staged to rip support away from the new president-elect? You bet it does.

In any event, there is little doubt that the incident hurt Trump with at least some Americans–perhaps voters who were already sitting on the fence about whether or not to support him. And honestly, that can be the only true reason why this was done.

Because that’s certainly how the discredited ‘mainstream media’ portrayed it, as The Daily Caller noted:

The attack, which was investigated by local and state authorities as well as the FBI, was widely attributed by media outlets to Trump supporters. The Atlantic, to cite one example, published an article entitled “A Black Church Burned in the Name of Trump.”

And, of course, Left-wing Democrats:

Mississippi U.S. Rep. Bennie Thompson, whose district encompasses Greenville, said last month that the arson and vandalism was an act of “domestic terrorism.”

“If there is something like the Ku Klux Klan or the Aryan Nation…we look at that as domestic terrorism,” he told the AP at the time.

So while the state fire marshall doesn’t believe this was politically motivated, he’s practically alone.

The lesson here, of course, is that insane Leftist Democrats and their supporters are willing to go to any extreme to cause damage to Trump and his presidency, even committing false flag attacks to incite rage and create division. Let’s just hope they don’t cross one bridge too far and ignite a nationwide civil conflict with stunts like this.