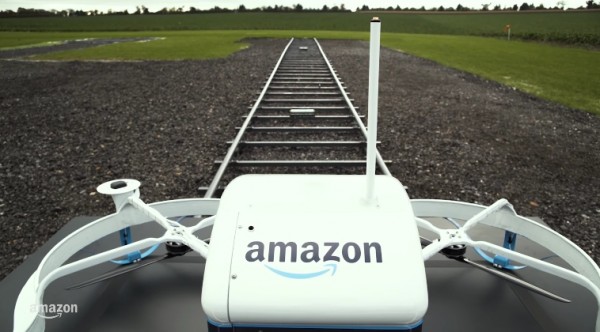 Although this month’s much-heralded first delivery performed by a fully autonomous Amazon.com drone was, in effect, little more than a publicity stunt – beta testing of the company’s drone delivery service currently includes a total of only two customers living in rural England – Jeff Bezos’ dream of filling the skies with commercial drones ready to cater to our every impulsive purchasing whim may not be all that far off in the future.

Almost exactly three years after Bezos first announced his plans to develop a drone delivery system for the company, the first Amazon PrimeAir drone lifted off from a launching track at an Amazon.com facility located near Cambridge, U.K., and successfully delivered its payload (an Amazon Fire Stick device and a bag of popcorn) to a customer living in a Cambridgeshire farmhouse located a short distance away.

The drone arrived at its destination 13 minutes after the order was placed, and the only human involved in the process was an employee who packed the box to be delivered.

Amazon chose the U.K. for beta testing of its drones because under existing U.S. law, drone deliveries beyond a pilot’s line-of-sight are prohibited. The company was able to persuade British authorities to suspend line-of-sight regulations for its drone testing operations in Cambridgeshire.

Only two customers are currently able to access the service, but Amazon plans to expand its Cambridgeshire drone deliveries to include hundreds of area customers.

Companies like Amazon face a number of technical and legal hurdles before drone deliveries can become commonplace.

Currently, drones are capable of carrying only small, lightweight packages, but advances in technology should soon help to solve much of their present size and weight limitations.

The logistics of delivery are challenging as well – what works in the English countryside will not necessarily translate easily to urban environments. And in the U.S., where Amazon would like to eventually introduce its drone delivery service, approximately two-thirds of the population live in urban areas.

But Amazon and others are betting on a future marketplace where all of these issues have been solved, and the U.S. government is helping to lay the groundwork for such a scenario.

“Amazon is one of six companies working with NASA and the US Federal Aviation Administration (FAA) on developing an air-traffic management system to integrate autonomous drones into the national airspace by 2019. …

“But we’re still in the relatively early stages of development; only a handful of FAA-sanctioned autonomous drone deliveries have taken place in the US, and the agency only recently laid the groundwork to let businesses research and develop commercial drone technology in the US.”

Did 7-Eleven beat Amazon to the punch?

Some drone delivery systems are already being field tested in the U.S., although on a limited scale. 7-Eleven, the world’s biggest convenience store chain, has reportedly delivered items via drone to 77 customers in the Reno, Nevada, area, and lays claim to the distinction of being the first company to send a drone delivery to “a U.S. resident who placed an order with a retailer.”

7-Eleven’s first drone delivery took place in July, and consisted of a “chicken sandwich, donuts, candy, Slurpees and hot coffee.” The Reno 7-Eleven delivers to customers within a mile of its location, and has seemingly proven that drone deliveries can work in an urban setting – and not just in the British countryside.

If Amazon, Google, 7-Eleven and other pioneers in the drone delivery market are successful, we’ll soon be able to order almost anything we can imagine – or afford – and have it delivered to our doorstep within minutes.

The question remains, however, whether this will be a good thing. And it relates to the larger question: Who will be able to buy anything once all of our jobs are replaced by AI systems, robots and drones?