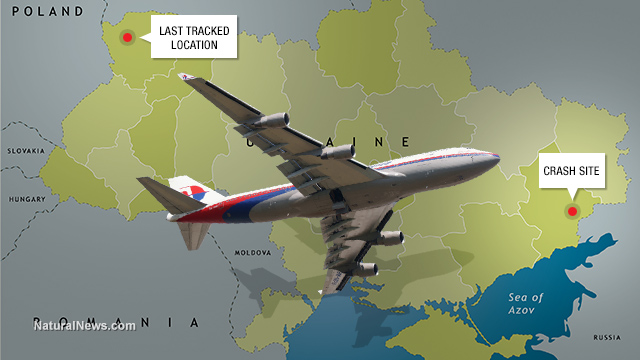 New information has emerged regarding the MH-17, which points to the wreckage belonging to lost flight MH-370. A missing window has appeared in some pictures circulating around the internet. A few years back, Malaysia Airlines renovated their jets. The renovation featured a modification of the interior, which blocks the window in question. Pictures of the MH-17 showing a window next to the door with the flag below are actually older image of the jet.

Secret agencies involved in the false flag are now realizing that this information has created a buzz around the internet. They are in a panic because the official Reuters images suggest that evidence of the wreckage has been altered. A window has miraculously appeared in at least two pictures, where previously there wasn’t any.

There must be a good reason for the counterfeit evidence. Is this an attempt to cover up a false flag?  Let’s go over some of the details we have at this time. The flag on the aircraft doesn’t align properly to the window in comparisons to recent pictures of the MH-17. The victims were all described as rotten corpses which have been drained of blood. Videos in circulation were created before the MH-17 was allegedly downed. Flight MH-17 was actually cancelled on the flight radar screen. Invalid passports were also found in pristine condition at the crash site. Sometimes invalid passports contain unexpired visas — but not the ones presented.

The US State Department Deputy Spokesperson, Marie Harf, admits that MH-17 evidence is based on YouTube clips and social media posts. She was told by AP reporter Matt Lee “Marie, I think that it would be best for all concerned here, if when you make an allegation like that you’re able to back it up with more than just ‘Because I say so.’”

US satellite images show Ukrainian troops shooting down the plane which was presented to the public as an MH-17. The audio files from the flight were studied by a group of experts, who uncovered shocking results. Reputable expert in sound and voice analysis, Nikolai Popov, says “This audio recording is not an integral file and is made up of several fragments.” The audio tape also clearly shows that it was created the day before the airliner crash.

There is a US military base conveniently located within flying distance of where the MH-370 vanished from radar. A passenger on board the MH-370, Phillip Wood, allegedly managed to send in a picture from his smartphone which tracks back to the Diego Garcia military base. Did the US take possession of the MH-370 to set it up for a false flag?