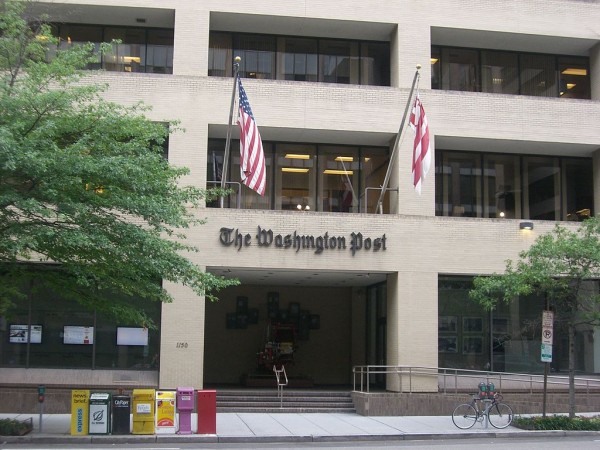 (Freedom.news) Confidence in the so-called “mainstream media” has gotten so low in the U.S. it’s quite possible, on average, that most people trust used car salesmen more and believe that aliens have landed on Earth in the past.

Of course, the those in the mainstream media have no one to blame but themselves. Case in point: A shoddy piece of “journalism” published recently by the Washington Post which relied on an obviously phony source to tar and feather (and defame) about 200 alternative news web sites. In short, the piece claimed those web sites were being used as outlets for Russian propaganda with the goal of torpedoing Democratic presidential nominee Hillary Clinton and helping her primary rival, now-President-elect Donald J. Trump, to victory.

The flood of “fake news” this election season got support from a sophisticated Russian propaganda campaign that created and spread misleading articles online with the goal of punishing Democrat Hillary Clinton, helping Republican Donald Trump and undermining faith in American democracy, say independent researchers who tracked the operation.

Russia’s increasingly sophisticated propaganda machinery — including thousands of botnets, teams of paid human “trolls,” and networks of websites and social-media accounts — echoed and amplified right-wing sites across the Internet as they portrayed Clinton as a criminal hiding potentially fatal health problems and preparing to hand control of the nation to a shadowy cabal of global financiers. The effort also sought to heighten the appearance of international tensions and promote fear of looming hostilities with nuclear-armed Russia.

Two teams of independent researchers found that the Russians exploited American-made technology platforms to attack U.S. democracy at a particularly vulnerable moment, as an insurgent candidate harnessed a wide range of grievances to claim the White House. The sophistication of the Russian tactics may complicate efforts by Facebook and Google to crack down on “fake news,” as they have vowed to do after widespread complaints about the problem.

Thing is, the Post’s entire report relied solely on the word of a previously-unknown and shadowy group of self-proclaimed “experts” who claimed they had been “tracking Russian propaganda” and tracked Kremlin fingerprints to the aforementioned 200+ web site including The Drudge Report, Zero Hedge, Natural News, Naked Capitalism and others that are legitimate news sources.

After a few weeks’ worth of blowback and threats of lawsuits from Naked Capitalism and Natural News (so far), the Post’s editors published this pseudo-retraction/explanation/apology this week:

Editor’s Note: The Washington Post on Nov. 24 published a story on the work of four sets of researchers who have examined what they say are Russian propaganda efforts to undermine American democracy and interests. One of them was PropOrNot, a group that insists on public anonymity, which issued a report identifying more than 200 websites that, in its view, wittingly or unwittingly published or echoed Russian propaganda. A number of those sites have objected to being included on PropOrNot’s list, and some of the sites, as well as others not on the list, have publicly challenged the group’s methodology and conclusions. The Post, which did not name any of the sites, does not itself vouch for the validity of PropOrNot’s findings regarding any individual media outlet, nor did the article purport to do so. Since publication of The Post’s story, PropOrNot has removed some sites from its list.

Why did the Post “vouch for the validity” of PropOrNot’s garbage claims in the first place, but not now? Who knows? The most likely explanation is the simplest one: The Post’s chosen candidate, Clinton, lost, and there had been fake stories circulating before the election that Trump and Russian President Vladimir Putin were an item, so to speak, so why wouldn’t Putin try to help his buddy, Trump, become president?

That in and of itself is unbelievably conspiratorial (WikiLeaks founder Julian Assange said the materials he was leaking did not come from Moscow), but to compound the foolishness with a fake news story that blamed ‘fake news’ spread by Russian intelligence to U.S. news sites – using a shoddy, unverifiable “source” – is just madness.

This all begs some questions, such as: How many other phony sources has the Post used in an attempt to trash political opponents? And what makes the “national newspaper” any different than the so-called “fake news” sites it criticizes?