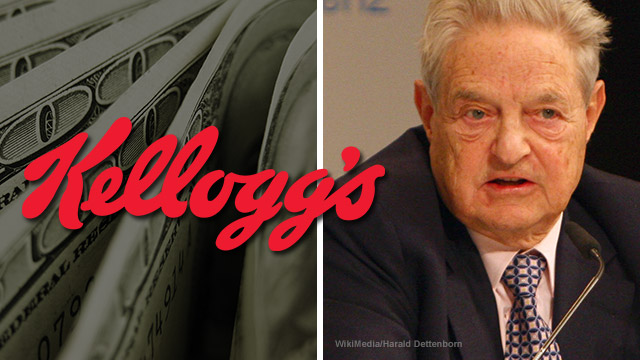 When you buy Kellogg’s products, you may be funneling money into the kind of hate-based operations associated with people who advocate killing cops in America. A Breitbart.com investigation found that “W.K. Kellogg Foundation has partnered with and given major donations to George Soros’s Open Society Institute and the Tides Center as part of its massive push to promote a far-left agenda.”

Soros funded the Ferguson protest movement, after the death of Michael Brown, on TV and on the streets. The liberal billionaire forged a political machine that impacts American politics and policy and mobilizes protest groups to spread hate propaganda across the US. Through years of funding, Soros injected more than $30 million to embolden on-the-ground activists in Ferguson and also gave rise to the combustible protest movement after the criminal event in Missouri.

All across American society, George Soros is funding racial division, hatred and social unrest. Apparently, Kellogg’s thinks this is all just dandy, because they’re giving money to George Soros organizations like Open Society Institute and the Tides Center. This means that buying Pop-Tarts is an act of racial hatred that plays right into the hands of truly evil globalists like Soros.

The racial hatred, division and anti-white racism that’s funded by Kellogg’s is, of course, described as “racial justice.” As Breitbart explains:

Another W.K. Kellogg Foundation grant in 2016 gave over $380,000 to Tides in order to: “Provide updated publications/tools describing the state of grantmaking with a racial equity/racial justice lens, including insights to support grantmaking considerations at the program officer and institutional levels, through support of the Philanthropic Initiative for Racial Equity.”

“Racial justice,” of course, means “executing white cops” to the radical left that’s funded by George Soros (and Kellogg’s). That’s why you get Black Lives Matter protesters chanting violent threats against police such as “Pigs in a blanket, fry ’em like bacon!”

Stop the HATE. Boycott all Kellogg’s brands and products

When you purchase Kellogg’s products, which include Kashi, Pop-Tarts, Meuslix, Raisin Bran, Smart Start and All-Bran, you are financially supporting HATE in America via George Soros “racial justice” groups that call for the open killing of law enforcement officers.

Keep that in mind the next time you’re shopping. And if that’s not reason enough, just realize that Kellogg’s products also contain GMOs, glyphosate, pesticides, corn syrup and other junk ingredients linked to chronic disease.