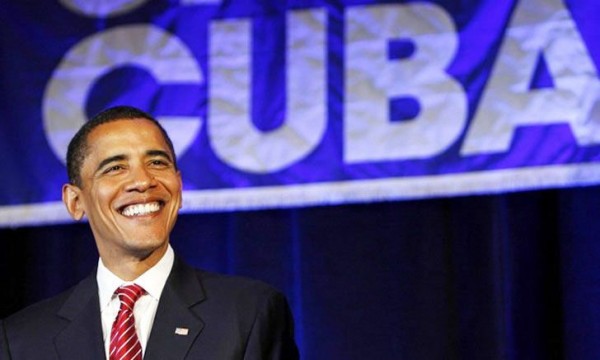 Following the death of the communist leader Fidel Castro, president-elect Donald Trump threatened to negate a deal reached in 2014 between Obama and Cuban President Raul Castro.

The agreement restored diplomatic ties and removed travel and trade restrictions between the U.S. and Cuba. The deal also removes Cuba from a list of state terror sponsors.

If Cuba is unwilling to make a better deal for the Cuban people, the Cuban/American people and the U.S. as a whole, I will terminate deal.

During the campaign, Trump said that he would overturn Obama’s overture if the Cuban government did not restore “religious and political freedom for the Cuban people and the freeing of political prisoners,” Fox News reports.

In September, however, Trump said the deal was “fine,” although he thought the United States should have gotten a better deal, CNN reported. Trump also said he is considering opening a hotel on the island.

His opinion changed while campaigning in Florida, a swing state with a large Cuban population.

“We’re not going to have a unilateral deal coming from Cuba back to the United States without some changes in their government,” said Trump’s chief of staff, Reince Priebus, according to The Telegraph. Priebus is chairman of the Republican National Committee.

If Trump rolls back the deal, it will have an economic impact on American corporations. U.S. airlines resumed flights to Cuba in August, and a number of companies and hotels have begun doing business on the island in anticipation of an increase in travelers.

“It’s not going to be easy to all the sudden [sic] say, ‘that’s illegal,’” Madeleine Russak, communications director for Engage Cuba, told The Hill.

John S. Kavulich, president of the U.S.-Cuba Trade and Economic Council, said that it would be relatively easy for Trump to end commercial flights to Cuba. He also said that there would likely be legal repercussions if the deal were to be terminated.

Companies with business interests in Cuba “could go to court and say, ‘we implemented services, we invested shareholders funds based upon on good faith efforts. And if you’re now going to disrupt that, we’re either going to seek to prevent you from doing so, or going to seek damages,’” Kavulich said.