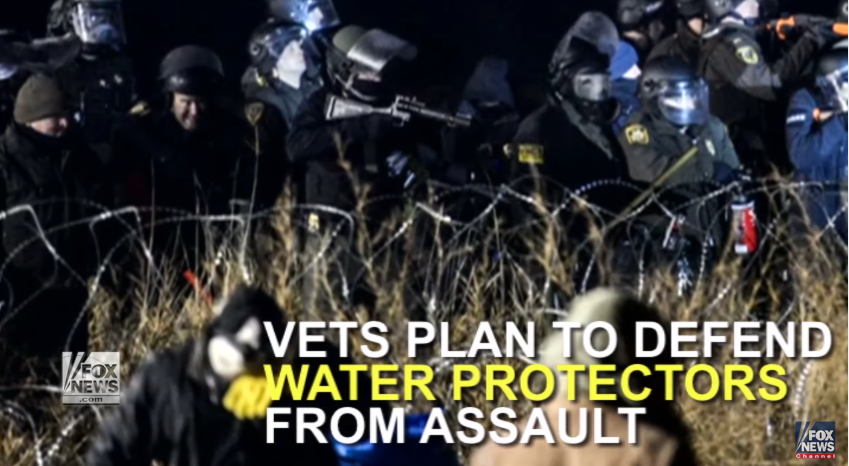 Veterans from multiple branches of the U.S. Military are planning to head to North Dakota to protect protesters (called Water Protectors) at the site of the Dakota Access Pipeline protests.

The organizers are raising money to send as many veterans as possible to stand between Water Protectors and law enforcement, and the organizers’ online fundraising site has raised hundreds of thousands of dollars in just a few weeks as people from all over the United States and world embrace the #NODAPL cause.

The group, which calls itself “Veterans for Standing Rock,” is “calling for our fellow veterans to assemble as a peaceful, unarmed militia at the Standing Rock Indian Reservation” on December 4-7 to protect the protesters from the law enforcement presence there.

The Dakota Access Pipeline (called “DAPL” in shorthand) is a multi-state oil pipeline that has been the focus of increasingly intense clashes for months between Water Protectors and law enforcement near the Standing Rock Sioux reservation in North Dakota. The Water Protectors say they are taking a stand for future generations and water quality, as well as fighting to protect sites of cultural and spiritual significance. The energy company behind the pipeline has claimed it will create jobs and reduce dependence on foreign oil sources.

The protests have brought together a historic gathering of people from many Indian nations as well as other protesters and celebrities.

Here’s what you need to know: 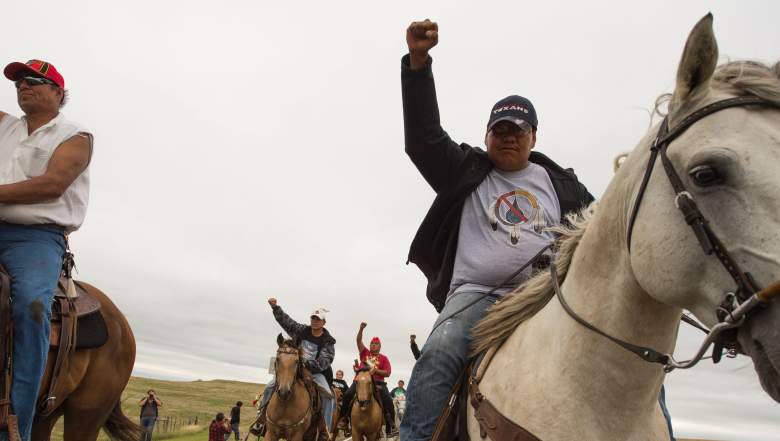 Native Americans ride with raised fists to a sacred burial ground that was disturbed by bulldozers building the Dakota Access Pipeline (DAPL). (Getty)

The veterans established a GoFundMe site to raise money for the veteran militia. You can find the site here.

The site has raised the more than $330,000 in just 14 days as people rally to support the tribe and Water Protectors. The veterans have also created an online “enlistment” form that veterans can use to sign up for the effort.

Pipeline supporters say it will create jobs and reduce American dependence on foreign oil. The Water Protectors say the pipeline could harm the environment and is endangering sites of spiritual and cultural significance.

“Everyday becomes more evident that the defenders of America must stand with the Water Protectors,” the veterans say on their site. “Let’s stop this savage injustice being committed right here at home. If not us, who? If not now, when? Are you a hero? Are you honorable? Not if you allow this the be the United States.”

2. The Veterans Come From All Branches of the U.S. Military 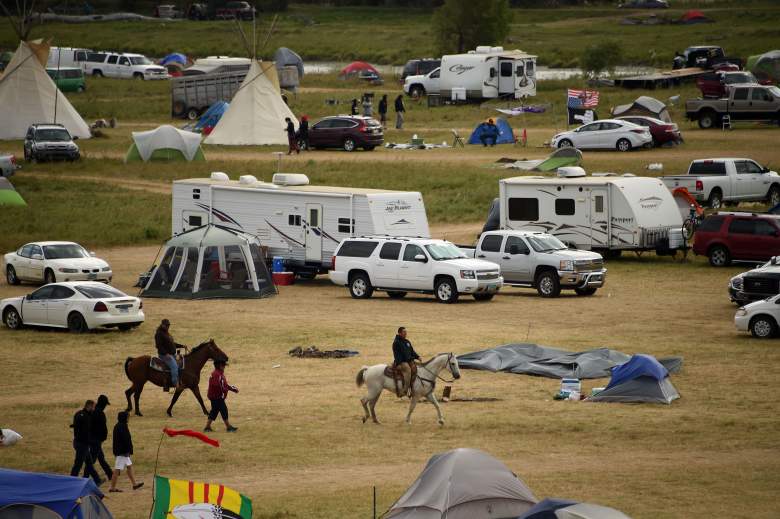 People on horses are seen at the encampment September 4, 2016 near Cannon Ball, North Dakota where hundreds of people have gathered to join the Standing Rock Sioux Tribe’s protest of the Dakota Access Pipeline (DAPL) that is slated to transport approximately 470,000 barrels of oil per day from the Bakken Oil Field in North Dakota to refineries in Illinois. (Getty)

According to the GoFundMe site, those involved are “veterans of the United States Armed Forces, including the U.S. Army, United States Marine Corps, U.S. Navy, U.S. Air Force and U.S. Coast Guard.”

The organizers wrote that the funds they raise “will go towards providing food, transportation and supplies for the brave patriots that come and stand with us.”

The organizers continued, “It’s time to display that honor, courage, and commitment we claim to represent. It’s time for real Patriots. Now more than ever, it’s time for anyone and everyone to lead.”

3. The Clashes Have Grown More Intense With Reports of Injuries & Dogs Used Against Protesters 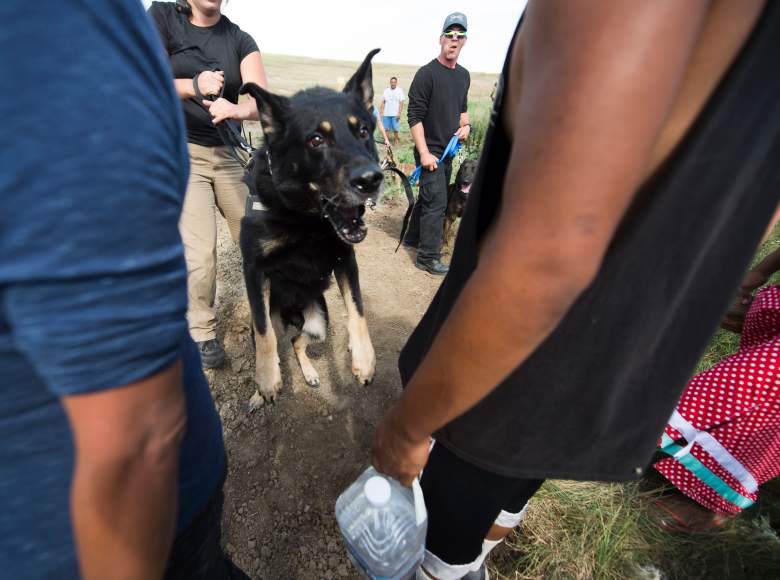 A protester is treated after being pepper sprayed by private security contractors on land being graded for the Dakota Access Pipeline (DAPL) oil pipeline, near Cannon Ball, North Dakota, September 3, 2016. (Getty)

The veterans say they want to protect the Water Protectors from what they call “assault” by police, who have adopted an increasingly militarized presence they say is necessary to protect private property. The Morton County Sheriff’s Department said on November 25, “Protesters continue to make aggressive efforts to trespass on property north of the protest camps.”

This has led to dramatic imagery as police in military-style vehicles and riot gear confront Water Protectors, who are often on horseback. The company that is building the pipeline has used private security guards with snarling dogs at the site, and has claimed some of its guards also were injured.

Protesters have said they were bitten by dogs, maced, and, most recently, a female protester’s arm was blown off. In the latter incident, the Standing Rock Medic and Healing Council released a statement that said in part, “The Morton County Sheriff’s Department has stated that she was injured by a purported propane explosion that the Sheriff’s Department claimed the unarmed people created. These statements are refuted by Sophia’s testimony, by several eye-witnesses who watched police intentionally throw concussion grenades at unarmed people, by the lack of charring of flesh at the wound site and by the grenade pieces that have been removed from her arm in surgery and will be saved for legal proceedings.”

The veterans’ site says, on November 20, the Morton County Sheriff’s Department’s “forces attacked water protectors with water cannons in freezing temperatures and launched concussion grenades into a peaceful crowd. Several had to be treated for hypothermia and one protester who was hit directly with a grenade has reportedly had her arm amputated as a result.”

The Sheriff’s Department posted a response on Facebook but now appears to have deleted its Facebook page entirely.

Protesters also said they were kept in cages that resembled dog kennels after on mass arrest. A woman was charged with struggling with an officer and firing a weapon, but missing.

4. The Effort Was Organized by Veterans Who Are a Screenwriter & Police Officer 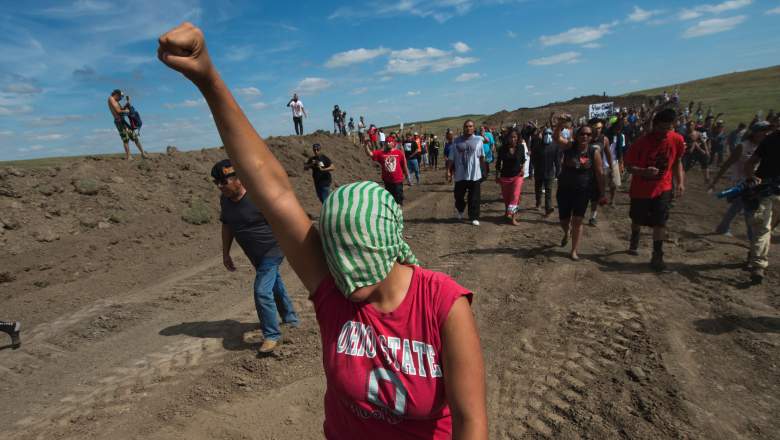 According to CNN, the event organizers are Wesley Clark, “a veteran, screenwriter and activist” and Michael Wood Jr., “a retired Baltimore police officer and Marine Corps veteran who advocates for police reform.”

Clark told CNN: “I’m going for religious reasons. I’m not a leader. I’m not in charge. We are self-organizing this.” On Twitter, Clark says he lives in Los Angeles and calls himself “Jack of All Trades, Committed Christian.”

Clark has said he was moved to act after receiving a call from a Standing Rock elder, and Wood told the news media, “If we don’t stand up for the oppressed, that’s the snowball that starts that leads to everyone else’s oppression.”

5. The Veterans Say They Won’t Tolerate Any ‘Hate’ & Want People to Bring Body Armor but Not Weapons 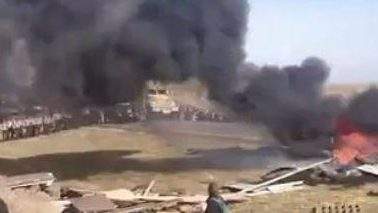 The scene of the clash between law enforcement and protesters at the Dakota Access Pipeline. (Morton County Sheriff’s Department)

The effort has a Facebook page where people can get more information. It reads, in part, “ADMIN NOTE: We’ve received a tremendous response from many of you wanting to join the march and get more information. Thank YOU & WELCOME! Step 1 is registering using the roster form pinned to this page. Once you complete that more details & communications will follow. Our team is currently coordinating Ride-Share’s from all over the US leveraging the funding from the GoFundMe. Details on supply needs, gear and travel logistics are forethcoming. Be patient with us please, we are small group of volunteers and we’re working hard to ensure this all goes to plan for everyone. If you have any questions, concerns or press queries please email them to [email protected] and thank you for your passion and your service.”

The Facebook page invites veterans to “come to Standing Rock Indian Reservation and hold the line with Wes Clark jr, Michael Wood jr, Tulsi Gabbard and hundreds of other veterans in support of the Sioux nation against the DAPL pipeline. Bring Body armor, gas masks, earplugs AND shooting mufflers (we may be facing a sound cannon) but no drugs, alcohol or weapons. Op Order to be published 10 November 2016.”

The organizers say they will not “tolerate hate, violence or divisive behavior of any kind. We’re doing this to support our country so lets do it with honor, working together. We can stop this savage injustice being committed right here at home. If not us, who? If not now, when?”