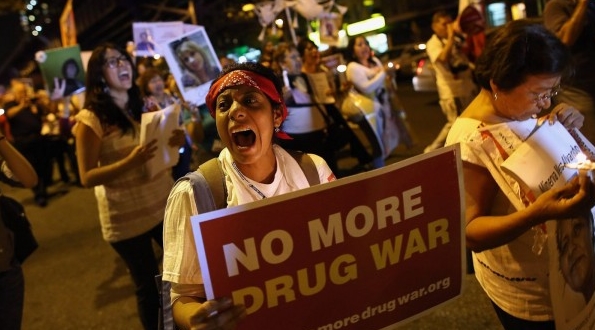 As the number of drug deaths reaches an all-time high in Britain, the most widely read medical journal in the country is calling for all drugs to be legalized.

The British Medical Journal is saying that it is the ethical responsibility of doctors to back drug legalization. Their position is that drug addiction is a health matter rather than a criminal one, and that police should not be involved. According to the BMJ, the fact that heroin fatalities have doubled during the past three years in the UK can be blamed on government policies.

The BMJ is joining a growing chorus of voices calling for the decriminalization of drugs. While many people have long held this viewpoint, recent decriminalization efforts in various parts of the world have yielded positive results, giving their arguments more weight.

Writing in the BMJ, former Deputy Prime Minister Nick Clegg suggests following the model of Portugal. Drug users in that country are now referred to treatment instead of being punished, and drug deaths there have dropped by 80 percent as a result.

In Scotland, meanwhile, police and councilors have approved plans to open Britain’s first “fix room,” where heroin addicts can go to inject drugs safely in a supervised environment. Similar facilities already operate in other countries, including France, Switzerland, Holland, Germany and Australia. The goal of such facilities is to help curb drug deaths, reduce the spread of infections and cut down on the amount of drug needles that are discarded in public spaces.

In June, two major health bodies in the UK also called for the decriminalization of the personal use of drugs. They argue that criminalizing drug users makes them less likely to get medical help, which can set in motion a number of negative outcomes, including imprisonment, employment loss and familial ruptures.

Godlee noted in the editorial that the war on drugs is actually a war on the people who use drugs, which are disproportionately minorities, women and poor people.  She added: “Doctors and their leaders have ethical responsibilities to champion individual and public health, human rights, and dignity and to speak out where health and humanity are being systemically degraded.”

The world’s biggest humanitarian organization, the Red Cross, called for decriminalization and other humanitarian drug policies back in 2012, saying that marginalizing drug users causes bigger problems to our society than we would see if the drugs were legal in the first place. Legalizing drugs could help reduce the number of crimes that are committed in response to artificially high drug prices, reduce the number of deaths caused by the unpredictable potency of street drugs and curb the spread of blood-borne diseases.

One need only look at what is happening in the states where recreational marijuana use has already been legalized to see what could happen if the BMJ’s call were heeded. Crime rates are dropping in these states, and the taxes collected on marijuana are being used to improve people’s lives. After Bolivia instituted a new policy under which farmers can grow limited amounts of coca to sell and use inside the country, violence and crimes both plummeted.

Of course, America’s war on drugs is a nice moneymaker for the prison system and law enforcement agencies. In fact, it’s costing us more than $50 billion a year. This might help explain why the DEA continues to claim that cannabis has no medicinal value despite evidence to the contrary. Moreover, medical marijuana and CBDs threaten the profits of Big Pharma, whose lobbyists hold significant influence in Washington, D.C. Hurdles like these make it seem unlikely that global legalization could be on the horizon soon.