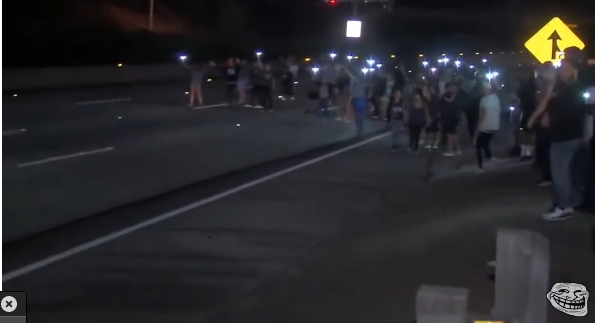 As the anti-Trump protests around the country rage on, they have now claimed their first life as the father of a 4-year-old girl died in an ambulance on the way to the hospital last night.  The man apparently died after his ambulance was prevented from reaching a hospital by protesters who decided they would prefer to block off a highway.  The incident was discovered by Paul Joseph Watson of InfoWars via the following Facebook post:

“I have to unfacebook for a few days. I had a patient die during a transfer last night because our ambulance was stopped by protesters and had to drive an extra 45 minutes around the blocked roads.”

“I can’t today. They can give their f**king safety pins to my patient’s fatherless 4 year old daughter.”

While the Facebook post hasn’t been verified, it’s certainly reasonable to assume it’s accuracy given the shear number of highway blockades setup by protesters across the country over the past week.

The mention of “safety pins” is in reference to a campaign started by anti-Trump protesters to wear safety pins to “show support for the vulnerable” and to express the fear that Trump’s supporters “may physically or emotionally abuse minorities, immigrants, women and members of the L.G.B.T. community.”

The report of anti-Trump protesters blocking an ambulance has not been verified, but it’s not unlikely given that anti-Trump demonstrators have blocked roads in numerous cities and states, including the I-94 in Minneapolis, the I-5 in Portland, numerous freeways in Los Angeles, a major highway in Phoenix, and the I-95 in Miami.

During the DNC-sponsored violent shut down of Donald Trump’s rally in Chicago back in March, anti-Trump agitators were caught on camera blocking an ambulance outside the UIC Arena.

And while most motorists simply deal with the idiocy of protesters who feel compelled to walk into oncoming traffic, others have refused to stop which resulted in the following incident in which a young girl was hit by oncoming traffic.

And with the protests growing more and more out of control over the recent weeks, we we’re finally able to track down footage of Obama and Hillary condemning the idiotic violence and property destruction of America’s disaffected youth.