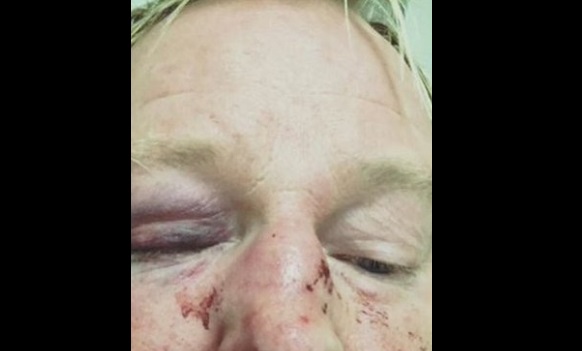 A Swedish chef was reportedly assaulted by three Muslim men who punched and kicked him in the face and head, sending him to the emergency room. Writing about the assault on Facebook, he said he was attacked because he looked like Donald Trump.
Article by  RT.com

Writing in a post which has since been deleted, Anders Vendel explained that two men grabbed his arms from behind, while a third began punching him in the face. After about 20 blows to the face, Vendel fell to the floor, and all three men began kicking him in the head and face.

The prominent Malmo chef said he believes the attack, which left him with a “broken nose, bumps, clogged eye, mouth, lips, and jaw… even a broken right thumb,” took place because he “looks like Donald Trump.”

The assault apparently took place at a fast food grill in Malmo at 4:25 Saturday morning, according to Sydsvenskan newspaper.

“I was angry, hurt and humiliated when I wrote what I was thinking at the time,” Vendel told The Local.

“I’m absolutely not a racist, not after what happened either. It could have been anyone. I’m alive – it will be OK,” he said, ironically adding that he enjoys the fast food restaurant where the attack took place, despite the fact that there “aren’t usually that many ‘white people'” there.

The reported attack comes as many across the US and the world are reeling from Donald Trump’s presidential win last week. Protests have taken place across the United States, with demonstrators decrying the Republican candidate’s campaign rhetoric about illegal immigrants, Muslims, and women, along with allegations that he sexually abused women.

Trump, who won the Electoral College tally despite losing the popular vote, will be inaugurated on January 20, 2017.