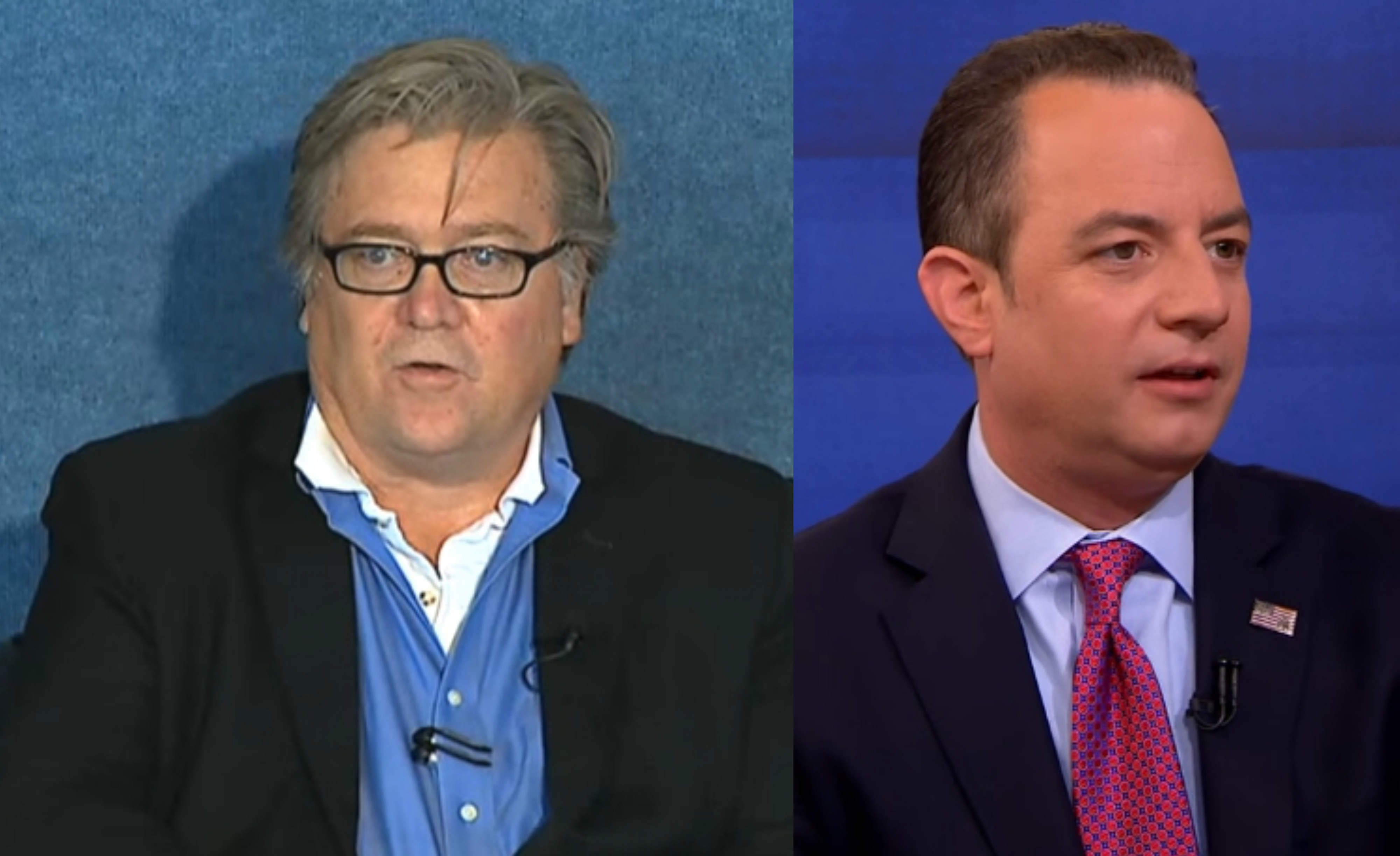 WASHINGTON — President-elect Donald J. Trump on Sunday chose Reince Priebus, the chairman of the Republican National Committee and a loyal campaign adviser, to be his White House chief of staff, turning to a Washington insider whose friendship with the House speaker, Paul D. Ryan, could help secure early legislative victories.

In selecting Mr. Priebus, Mr. Trump passed over Stephen K. Bannon, a right-wing media provocateur. But the president-elect named Mr. Bannon his senior counselor and chief West Wing strategist, signaling an embrace of the fringe ideology long advanced by Mr. Bannon and of a continuing disdain for the Republican establishment.

The dual appointments — with Mr. Bannon given top billing in the official announcement — instantly created rival centers of power in the Trump White House.

Mr. Bannon’s selection demonstrated the power of grass-roots activists who backed Mr. Trump’s candidacy. Some of them have long traded in the conspiracy theories and sometimes racist messages of Breitbart News, the website that Mr. Bannon ran for much of the past decade.

The site has accused President Obama of “importing more hating Muslims”; compared Planned Parenthood’s work to the Holocaust; called the conservative commentator Bill Kristol a “renegade Jew”; and advised female victims of online harassment to “just log off” and stop “screwing up the internet for men,” illustrating that point with a picture of a crying child.

The grass-roots activists may be angered by the selection of Mr. Priebus as chief of staff, viewing him as a deal maker who will be too eager to push the new president toward compromise on issues like taxes, immigration, trade, health care and the environment.

In a statement Sunday afternoon, the transition team emphasized that the two men would work “as equal partners to transform the federal government.”

The arrangement appeared aimed at ensuring that both men would be required to sign off on many decisions jointly. And Mr. Bannon was assured that he reports directly to Mr. Trump, not to Mr. Priebus.

The simultaneous announcement and competing lines of authority are consistent with Mr. Trump’s management style in his businesses and in his campaign: creating rival power structures beneath him and encouraging them to battle it out.

It is also a reflection of who has the ear of the president-elect: his children, and especially his eldest daughter, Ivanka Trump, and her husband, Jared Kushner. Both had argued that the chief of staff job should not be held by someone too controversial, according to several people familiar with the decision-making inside the transition effort.

Mr. Kushner is likely to wield great influence over the new president regardless of whether he holds a formal title. Mr. Kushner, who has no experience in politics or government, often has the final word in advising Mr. Trump.

But while Mr. Trump apparently feels comfortable with Mr. Priebus, the people with knowledge of his weekend decision said Mr. Bannon was still the adviser who was better able to talk forcefully to the president-elect during difficult moments.

The transition team appeared eager to appease concerns among Mr. Trump’s most fervent supporters that choosing Mr. Priebus meant the president-elect had already caved to the Washington “swamp” he had promised to drain. The team also wanted to mollify Mr. Bannon, and to that end, the official statement mentioned Mr. Bannon first.

“We had a very successful partnership on the campaign, one that led to victory,” Mr. Bannon said in the statement. “We will have that same partnership in working to help President-elect Trump achieve his agenda.”

Mr. Priebus said he looked forward to working with Mr. Bannon and Mr. Trump “to create an economy that works for everyone, secure our borders, repeal and replace Obamacare and destroy radical Islamic terrorism.”

Mr. Priebus is expected to have multiple deputies, including Katie Walsh, the chief of staff of the Republican National Committee, who is close to Mr. Priebus and helped ensure a tight working relationship between the party’s operational infrastructure and Mr. Trump’s campaign.

A onetime Goldman Sachs banker, Mr. Bannon has transformed himself into a media figure who favors a scorched-earth style of politics and is deeply suspicious of the government establishment and the corporate elite. During the campaign, he pushed Mr. Trump to embrace a fierce populism that helped fuel his victory.

Mr. Trump’s decision last summer to put Mr. Bannon in charge of his campaign was part of an effort to reset a candidacy that had been troubled by controversies surrounding high-level campaign officials.

Mr. Bannon’s appointment on Sunday set off a fierce response on Twitter and in Washington. The Anti-Defamation League issued a scathing statement calling him “hostile to core American values.”

“It is a sad day when a man who presided over the premier website of the ‘alt-right’ — a loose-knit group of white nationalists and unabashed anti-Semites and racists — is slated to be a senior staff member in the ‘people’s house,’” the statement said.

Adam Jentleson, a spokesman for Senator Harry Reid of Nevada, the Democratic leader, said, “It is easy to see why the K.K.K. views Trump as their champion when Trump appoints one of the foremost peddlers of white supremacist themes and rhetoric as his top aide.”

The charges date back two decades to the end of a troubled marriage to Mary Louise Piccard, who said he had attacked her at their home in Santa Monica, Calif.

He was charged in February 1996 with domestic violence, battery and trying to dissuade a victim from reporting a crime, but the case was dropped when Ms. Piccard did not show up to court. In court records, Ms. Piccard later claimed that Mr. Bannon had instructed her to leave town to avoid testifying.

Despite his image as a bomb-thrower, Mr. Bannon is also savvy at cutting deals to achieve his goals.

But as chief of staff, Mr. Priebus will be the one who has several hundred White House staff members reporting to him. He will be the primary gatekeeper for Mr. Trump and the person most responsible for steering the president’s agenda through Congress. That role will be especially critical for Mr. Trump, who has never served in government and has few connections to important political figures.

The selection of Mr. Priebus comes at the end of a roller-coaster year for the Republican Party, which saw Mr. Trump rewrite many of its policy orthodoxies, clash with its leaders in Congress and denigrate the Bush political dynasty.

Mr. Priebus worked with Mr. Trump on the nuts and bolts of presidential politics, trying to smooth his rough edges and staying in close contact as a bare-bones campaign prepared to go up against the Clinton machine.

On the surface, the two men could hardly be more different. While Mr. Trump, 70, is known for his brashness and at times his viciousness, Mr. Priebus, 44, is regarded for his low profile and humility.

A Wisconsin native and lawyer by training, Mr. Priebus has never held elected office. But he served as state treasurer and worked his way up through the Wisconsin Republican Party to become chairman, putting him on the Republican National Committee, where he eventually became general counsel to the chairman at the time, Michael Steele.

Now the longest-serving Republican National Committee chairman, Mr. Priebus was elected to the job in 2011, unseating Mr. Steele on the promise of modernizing the party and refilling its coffers. With his focus on fund-raising and fiscal issues, Mr. Priebus let Republican leaders in Congress be the voices of the party during the early part of his tenure. His profile rose as the 2016 election got into gear.

At times, Mr. Priebus, whose first name rhymes with “pints,” struggled to defend Mr. Trump’s antics, but he showed his loyalty by supplementing the campaign’s resources and by urging Republicans to fall in line behind the candidate in spite of their reservations.

When Mr. Trump emerged onstage to give his victory speech early Wednesday, Mr. Trump made his appreciation clear, dismissing rumors of tension with Mr. Priebus and singing his praises.

“I never had a bad second with him,” Mr. Trump said. “He’s an unbelievable star.”