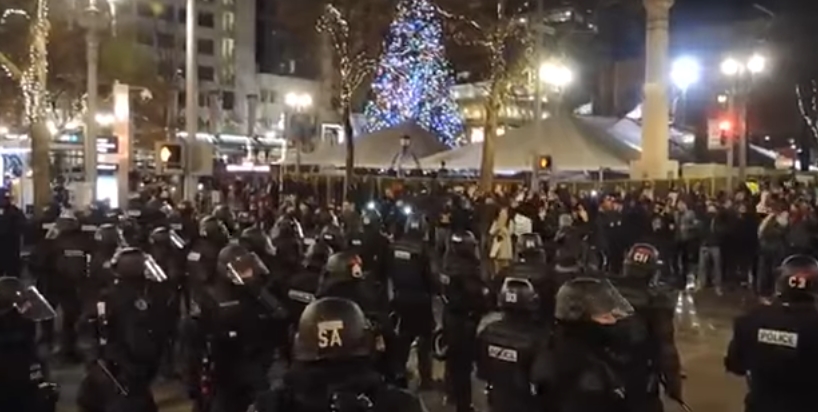 Officers arrested at least 26 people, according to Portland Police. No law enforcement officers were hurt in what officials labeled as a riot.

The third day of the protests against President-elect Donald Trump started around 5 p.m. at Pioneer Courthouse Square. About 4,000 people marched over the Hawthorne Bridge, through the Lloyd Center. At that point, the protest appeared to break apart when some people began using bats to bash in cars at a Honda dealership.

The largely peaceful protest continued west over the Broadway Bridge at around 9 p.m. and into the Pearl District with dozens of people who are describing themselves as anarchists and radicals. They broke windows of several businesses and restaurants, and bashed in a transformer in an effort to cut electricity.

Police in riot gear responded to the North Park Blocks area, where an apparent showdown occurred between rioters and officers. Portland Police officials went on a loudspeaker and told the peaceful members of the group to disperse or head back to Pioneer Square.

According to police, people threw projectiles at officers. At least three were taken into custody.

“They’ve created an incredibly unsafe and tumultuous arguments. We also know there are people in that crowd that want nothing to do with them and tried to stop them unsuccessfully,” Pete Simpson with Portland Police said.

No injuries have been reported.

After those arrests, about 1,500 protesters moved to Pioneer Courthouse Square just before 11 p.m. While they appeared peaceful, Portland Police say objects were thrown at police. Officers in riot gear worked to disperse the crowd, calling it an unlawful gathering.

Police used flash-bangs and gas canisters on those that remained in the street, and their numbers started to decrease. At one point, police swept a parking garage where someone had been throwing objects down at officers.

Police made more arrests at about 1:30 p.m. and the remaining few people dispersed.

Hundreds of people had also gathered at the waterfront for an LGBTQ vigil.

The protests over the last two nights have been led by members of Don’t Shoot PDX and Portland’s Resistance. A spokesman for the latter group, Gregory McKelvey, initially intended to lead another peaceful protest. He said their group does not condone the violence and vandalism that broke out in the Pearl District at the hands of a small percentage of those on the streets.

“If you are upset about Donald Trump, I completely understand. That’s why we tried to build a movement about love and understanding,” said McKelvey. “I’m incredibly saddened that the story has become one of riots and violence and destruction.”

When the protest Thursday evening shifted to a riot, McKelvey said he left.

In a message sent out earlier in the day, McKelvey unveiled Portland’s Resistance, a new organization that supports Don’t Shoot PDX, Black Lives Matter, Portland tenants United, PDX Trans Pride and a host of other groups.

Portland’s Resistance released a list of demands that ranged from an end to no cause evictions to stopping the racial disparity in policing. You can find the group’s press release listed below.

Thursday morning, Trump met with President Obama in the Oval Office, and the two spent an hour and half discussing the transition, among other things.

Obama said he was ‘encouraged’ by his conversation with Trump, calling the Oval Office meeting ‘excellent’ and wide-ranging, according to the Associated Press. It is yet to be seen whether this signal of unity from the nation’s highest office will ease tensions in a nation that has grow more divided than ever by a vicious election cycle.

This is an announcement of a new organization. We entirely support and endorse the movements of Black Lives Matter, Don’t Shoot Portland, Portland Tenants United, PDX Trans Pride, Bernie PDX, Portland Clean Air, East Portland Air Coalition, 15 NOW, Health Care for All Oregon and more to come in the days ahead.

In order to survive President Trump there needs to be a strong resistance. Our group believes that Portland has an opportunity to become a beacon of light for the rest of the nation. We can show the world what a progressive city can actually look like. However, for this to be done we need drastic changes now. We do not have time to spare. Our organization is demanding in Portland:

We are holding an event today at Pioneer Square (5 PM) to rally for this agenda.