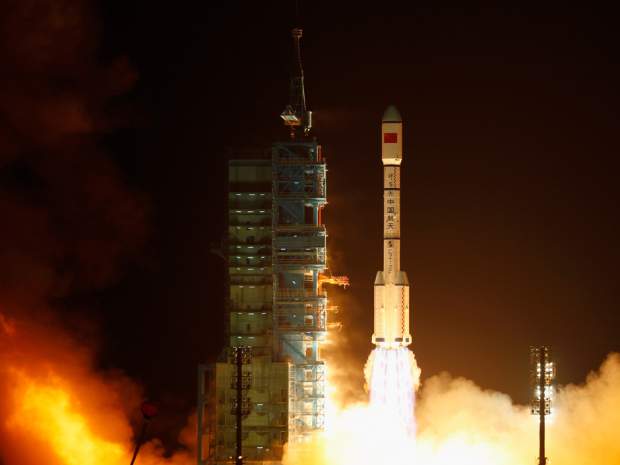 Tiangong 1, China’s first space laboratory, will come to a fiery end in late 2017. The average decommissioned satellite either burns up over a specific ocean region, or is ejected to a far-off orbital graveyard. But Tiangong 1’s demise is shaping up to be something different.

Chinese officials appeared to admit that they had lost control of the station during a Sept. 14 news conference in Jiuquan.

“Based on our calculation and analysis, most parts of the space lab will burn up during falling,” said Wu Ping, a director at China’s space engineering office, during the conference. A day later China launched Tiangong 2, the lab’s successor, aboard a Long March 7 rocket.

Wu added that China is monitoring the space station for collisions with other objects. And Xinhua, China’s government-run news agency, reported that the Chinese space agency may need to release an international forecast for where Tiangong will land at a later date – an uncertainty that seems to indicate the descent is uncontrolled.

For the moment Tiangong 1 remains whole, currently orbiting the planet more than 320 kilometres above Earth’s surface. China launched Tiangong 1, which translates to “Heavenly Palace,” in 2011. (Strangely, as the rocket carrying the station blasted into space five years ago, China’s state-run TV station played “America the Beautiful.”) It served as China’s base of space experiments for roughly four-and-a-half years, two years longer than originally anticipated. The last crewed mission was in 2013, though the station continued to autonomously operate until it was decommissioned in March 2016.

Soon after, rumors surfaced that China no longer had control of the spacecraft. In June, amateur satellite tracker Thomas Dorman, from El Paso, warned Space.com that, based on his observations, the 8-ton space lab was out of control.

If I am right, China will wait until the last minute to let the world know it has a problem with their space station

“If I am right,” Dorman said at the time, “China will wait until the last minute to let the world know it has a problem with their space station.”
Harvard University astrophysicist Jonathan McDowell agreed that China’s announcement indicated the spacecraft will fall where it may.

Most satellites are not laid to rest this way. Many smaller craft incinerate completely in the upper atmosphere. For larger spacecraft destined for re-entry, the usual method is a planned descent. The wreckage that survives re-entry splashes down far from human habitation. Some 4,000 kilometres to the east of New Zealand, for instance, is a patch of the Pacific Ocean informally known as the spacecraft cemetery. Remains of the Mir station and more than a hundred other Russian, European and Japanese satellites sit in this area.

Though much of Tiangong 1 will disintegrate, McDowell predicted that 90-kilogram pieces – the tougher remnants of, say, rocket engines – could withstand the trauma of re-entry.

Even though China may not be able to steer Tiangong 1’s flaming corpse into a specific spot, humans will likely be unharmed. The odds are very low it will fall in an inhabited area: Roughly speaking, half of the world’s population lives on just 10 per cent of the land, which translates to only 2.9 per cent of Earth’s surface. (By way of context, going back the last 1,000 years, no meteorite has killed a person.)

This would not be the first uncontrolled landing, either. President Jimmy Carter issued an apology to Australia in 1979, after the 77-ton Skylab fell to Earth. The wreckage landed near a remote Australian town. Though no one was injured, the Australian town fined the United States $400 for littering. A California radio DJ finally paid the fine in 2009.