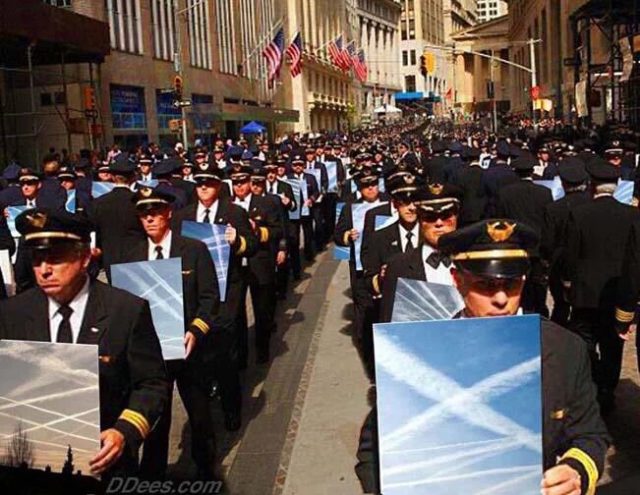 Italian activists took to the streets singing, shouting and marching in a rousing protest, demanding an end to the chemtrails and geoengineering strategies. Their signage and voices echoed a world-wide message: stop killing the earth, and us, with chemtrails.

These protesters were inspired by other activists who utilized their talents and energies to shed light on this dark and devastating practice. The picture above shows a sea of pilots dressed in uniform. They march in unison with signs that depict blue skies latticed with the grey-white toxic fumes that have been strategically sprayed into the stratosphere. This eye-catching illustration was created by artist David Dees.

Geopolitics.com reports that in 2014, a real whistleblower pilot spoke out to a family member concerning a secret military and aviation operation named “Indigo Skyfold.” He revealed that the pilots who fly the chemtrail missions are chosen from the top ranks of the military, Many do not have children. He described them as being robotic people who are “hardened to humanity.” The whistle blower also said at least 1/3 of all chemtrail missions are flown from remote islands that cannot be tracked on Google. He leaked that pilots are told chemtrail dispersions must be completed or America faces terrible consequences.

The Italian protestors were also inspired by an Italian couple, Antonio and Rosario Marciano. They produced a  video entitled, Chemtrials, The Secret War. This documentary takes the contrail vs. chemtrail discussion and makes the distinction absolutely clear – especially for those who still don’t believe that the spraying is occurring. Additionally, they speak with scientists and doctors who verify the toxins falling through our skies.

Let’s imagine that this superimposed chemtrail protest image was real. What would happen? At first, the chemtrail protest would be front page headlines and lead stories on TV. However, it would not take long for the global elite to write up a few scripts, and then pay off their media lapdogs to assure the world that these pilots are merely a rogue group of disaffected employees who don’t understand that chemtrails are not only safe, but imperative to saving our planet. But the media cover-up can only last so long, especially if pilots actually quit flying.

Each of us has the duty to tell the truth about chemtrails to those who do not know. After all, breathing clean air and eating clean food is essential for a healthy life. Seems that may be why they’re spraying us.