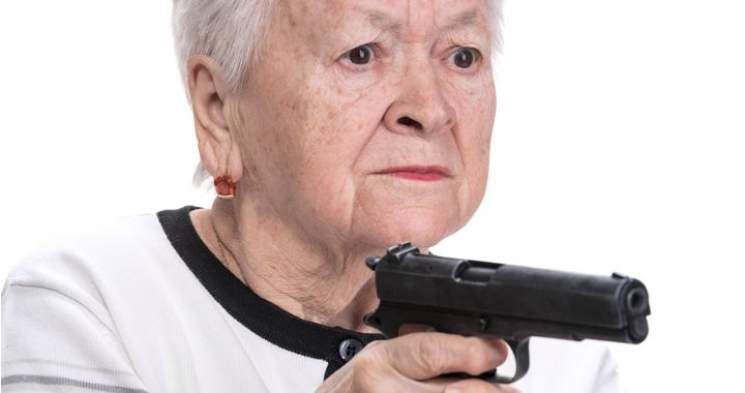 Richard Swift could be anyone’s grandfather. Born in 1949, he grew up around guns. He got his first .22 at age 12 and learned how to pick off rodents on his family farm in southeastern Pennsylvania. Said Swift: “Mostly, I was just shooting things that were there, like a stick floating down the creek. I’d shoot bumblebees if they settled on a limb … any kind of small, challenging target.”

When he joined the National Guard, he competed in marksmanship matches, and when he delivered cash between branches of a local bank, he carried a firearm for protection.

But now he’s retired and still owns that .22, along with a couple of other rifles, two pistols, and a pair of shotguns. And he has no plans to dispose of any of them.

And that makes Shannon Frattaroli very nervous. An associate professor at the Johns Hopkins Bloomberg School of Public Health, she told the Silver Century Foundation:

When I think about older adults and access to guns, the thing that immediately springs to mind is their incredibly high rates of suicide — and suicides from guns in particular. From a public health perspective, that’s a really big concern….

With that in mind, any conversation about guns has to include a conversation [about] gun ownership among older adults.

And then she added ominously: “There’s definitely more to be done on that issue in the United States.”

If someone has frontal lobe dementia … he could be at a greater risk of using that firearm to harm themselves [sic] or others as they misinterpret their environment.

[Dementia can result in] behavioral discontrol [sic] and angry outbursts and … could result in gun violence.

Other concerns from those who are calling for restricting the Second Amendment rights for older citizens include the loss of manual dexterity, reduction of visual acuity, and degradation in the hand strength needed to operate a firearm.

California, leading the attack about such concerns, has adopted Gun Violence Restraining Orders (GVROs), effective the first of next year, that family members and concerned friends and neighbors will be able to use to forcibly remove firearms from people they think might be at risk to themselves or others. They can request a temporary GVRO that would allow police to seize a person’s firearms for up to a year. This would give authorities plenty of time to determine if the action is “reasonable” — if Grandpa can still be trusted to own firearms, or not.

In other words, GVROs override the U.S. Constitution’s Fourth Amendment, which demands “probable cause” before such an action can be taken. As explained by Los Angeles Police Department Assistant Chief Michael Moore:

This law gives us a vehicle to cause the person to surrender their weapons, to have a time out, if you will. It allows [time for] further examination of the person’s mental state…. It’s a short duration and it allows for due process.

That due process, however, comes only after the seizure, when Grandpa will be allowed to sue for the return of his confiscated weapons.

This is how rights are lost: slowly, over time, and then all at once. “Reasonable” infringements of the Second Amendment include restricting those with a history of felonies, especially those where firearms were involved. Others might include mental illness where there is a history of an individual spending time in a mental hospital. Another group whose rights might be infringed are those convicted of drug abuse involving, perhaps, heroin, cocaine, methamphetamines, and the like.

But as the attack on the Second Amendment continues unabated, one doesn’t need to be paranoid to see the trend. Veterans, especially those disabled, are on the list, along with Social Security recipients who use a bookkeeper or other financial advisor to help manage their affairs. There are others whose weapons might be seized: someone suffering from a job loss, or the death of a spouse, or from depression. After all, grandchildren could be put at risk if they find a gun at Grandpa’s house or, Heaven forbid, he might get upset with them. In addition there could be accidents due to Grandpa’s increasing frailty. The list goes on.

Doctors must ask their patients if they have a gun at home. Frattaroli applauds this: “I certainly think it’s a reasonable area for physicians to pursue, particularly when we’re taking about people who are at higher risks of suicide.”

Others are suggesting that Grandpa submit himself to competency tests such as those some states require in order to keep his driver’s license current.

It was Pastor Martin Niemoller who first spelled out the dangers of such “reasonable” incrementalism in sermons he gave following World War II. Niemoller saw that incrementalism firsthand, and spent time in a German concentration camp for resisting it. He explained,

First they came for the Socialists, and I did not speak out — because I was not a Socialist.

Then they came for the Jews, and I did not speak out — because I was not a Jew.

Then they came for me — and there was no one left to speak for me.