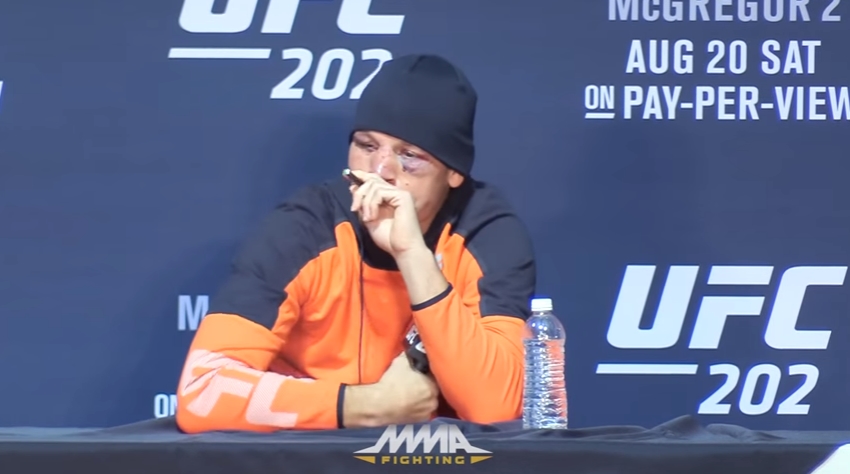 Shortly after losing a controversial majority decision to Conor McGregor at UFC 202, welterweight MMA fighter Nate Diaz began his recovery process by smoking out of a vape pen that was filled with CBD oil — in front of a group of reporters at his post-fight press conference.

When asked by a reporter why he was smoking CBD oil, Diaz responded, “It helps with the healing process and inflammation, stuff like that. You want to get these before and after a fight, training. It’ll make your life a better place.” Considering the fact that Diaz had spent 25 minutes prior exchanging punches to the face with the notoriously heavy-handed McGregor, ingesting cannabis was likely an excellent decision for his health.

But, unfortunately, it seems as though the United States Anti-Doping Agency (USADA) may be looking to punish Diaz, even though he did absolutely nothing wrong. He didn’t even break the rules USADA had in place. Since marijuana isn’t considered illegal when used out of competition — and since Nate had already taken his post-fight drug test — there’s no logical reason for the organization to look to punish him.

Unfortunately, logic isn’t necessary when it comes to groups trying to demonize cannabis.

This isn’t the first time a Diaz has been in hot water with athletic commissions over marijuana, either. Nate’s brother, Nick, a former world champion was recently in a high-profile spat with the Nevada Athletic Commission (NAC) after they wrongly suspended him for failing an in-competition test for marijuana.

The notoriously polarizing duo have been immensely outspoken about the benefits of smoking cannabis and incorporating it into their training regimen. In addition to their organic, mostly vegan diets, the brothers’ adoration of marijuana has elevated them to becoming cult heroes among both MMA fans and cannabis supporters.

If USADA makes the mistake of actually trying to penalize Diaz for his actions, they will be opening up a Pandora’s box that they are certainly unprepared for.