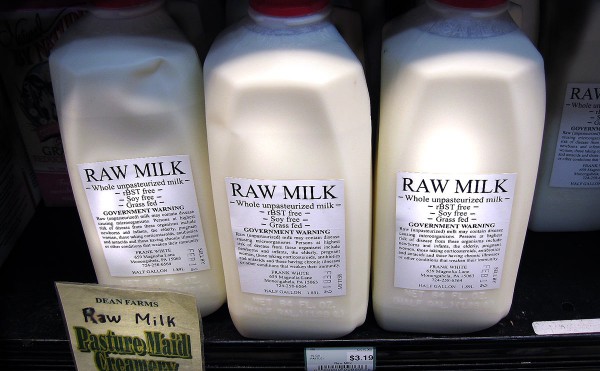 The United States Food and Drug Administration (FDA) would like us all to believe that raw milk is a flaming health hazard with the potential to cause a national disaster. What could be more toxic than raw food, right? That must be what is making our nation sick – not the over-consumption of genetically-modified, pesticide-laden foodstuffs.

However, a recent study published in The Journal of Allergy and Clinical Immunology has shown that consuming raw milk will not, in fact, be a death sentence. Researchers, doctors and other medical professionals from across Europe joined forces to investigate the effects of consuming raw milk, and revealed that raw milk isn’t just non-toxic, but also yields some impressive health benefits!

The investigatory project, playfully known as PASTURE, discovered that raw milk can help to prevent viruses, colds and respiratory infections from forming in children when compared to conventional, processed milk. For the study, researchers recruited a group of pregnant women who were in their third trimester. Approximately half of the women lived and worked on livestock farms in rural areas, primarily in central Europe. The researchers asked the women to detail their dietary and lifestyle habits, including their milk consumption. The information was then evaluated and compared.

In total, 983 children were included in the final data set, which is what revealed the truth about raw milk: its immune-boosting health effects are far superior to that of conventional pasteurized milk. The research indicated that raw milk functions a lot like breast milk, in that it imparts immunity to its consumers. Raw milk also helps to reduce C-reactive proteins, which are directly associated with inflammation.

Conversely, conventional milk may actually contribute to inflammation, due to the altered proteins that are created during processing. Essentially, raw milks helps to decrease inflammation, while processed milk creates more inflammation.

The study authors state, “The main finding of this analysis was an inverse association between consumption of unprocessed cow’s milk and rhinitis [cold or runny nose], RTI [respiratory tract infections], and otitis [ear infection].” They also went on to note that raw cow’s milk produced the greatest positive effect, while boiled farm milk produced a more modest benefit.

C-reactive proteins are thought to be one of the leading causes of disease, and raw milk helps to decrease their presence in the human body. Conversely, conventional milk does absolutely nothing to fight their presence. Raw milk consumption was also associated with a 30 percent decreased risk of respiratory infections and fevers, and could even help children to combat these ailments. Minimally processed milk, such as fresh milk boiled right at the farm, was also found to provide a modest benefit to children, though its effects were not nearly as pronounced as those seen in true raw milk.

One of the study’s lead authors, Dr. Ton Baars, a professor and senior scientist for milk quality and animal welfare at the Research Institute of Organic Agriculture in Germany, states that their data provides new evidence of raw milk’s protective qualities, especially against diseases in young children.