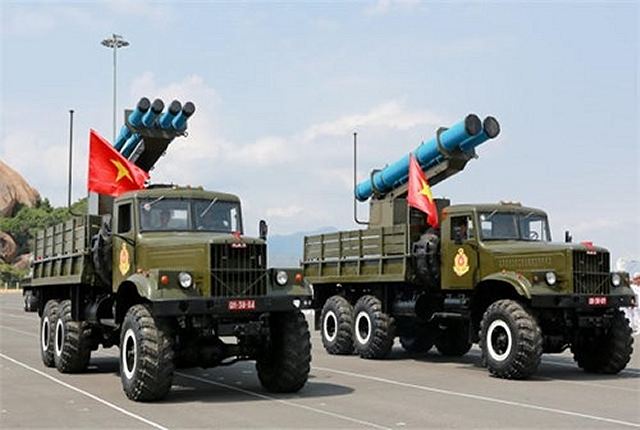 (NationalSecurity.news) [Reuters] Vietnam has discreetly fortified several of its islands in the disputed South China Sea with new mobile rocket launchers capable of striking China’s runways and military installations across the vital trade route, according to Western officials.

Diplomats and military officers told Reuters that intelligence shows Hanoi has shipped the launchers from the Vietnamese mainland into position on five bases in the Spratly islands in recent months, a move likely to raise tensions with Beijing.

The launchers have been hidden from aerial surveillance and they have yet to be armed, but could be made operational with rocket artillery rounds within two or three days, according to the three sources.

Vietnam’s Foreign Ministry said the information was “inaccurate,” without elaborating.

Deputy Defence Minister, Senior Lieutenant-General Nguyen Chi Vinh, told Reuters in Singapore in June that Hanoi had no such launchers or weapons ready in the Spratlys but reserved the right to take any such measures.

“It is within our legitimate right to self-defense to move any of our weapons to any area at any time within our sovereign territory,” he said.

The move is designed to counter China’s build-up on its seven reclaimed islands in the Spratlys archipelago. Vietnam’s military strategists fear the building of runways, radars and other military installations on those holdings have left Vietnam’s southern and island defenses increasingly vulnerable.

Military analysts say it is the most significant defensive move Vietnam has made on its holdings in the South China Sea in decades.

Hanoi wanted to have the launchers in place as it expected tensions to rise in the wake of the landmark international court ruling against China in an arbitration case brought by the Philippines, foreign envoys said.

The ruling last month, stridently rejected by Beijing, found no legal basis to China’s sweeping historic claims to much of the South China Sea.

Vietnam, China and Taiwan claim all of the Spratlys while the Philippines, Malaysia and Brunei claim some of the area.

EXTRA rounds are highly accurate up to a range of 150 km (93 miles), with different 150 kg (330 lb) warheads that can carry high explosives or bomblets to attack multiple targets simultaneously. Operated with targeting drones, they could strike both ships and land targets.

That puts China’s 3,000-metre runways and installations on Subi, Fiery Cross and Mischief Reef within range of many of Vietnam’s tightly clustered holdings on 21 islands and reefs.

While Vietnam has larger and longer range Russian coastal defense missiles, the EXTRA is considered highly mobile and effective against amphibious landings. It uses compact radars, so does not require a large operational footprint – also suitable for deployment on islets and reefs.

“When Vietnam acquired the EXTRA system, it was always thought that it would be deployed on the Spratlys…it is the perfect weapon for that,” said Siemon Wezeman, a senior arms researcher at the Stockholm International Peace Research Institute (SIPRI).

There is no sign the launchers have been recently test fired or moved.

China took its first Spratlys possessions after a sea battle against Vietnam’s then weak navy in 1988. After the battle, Vietnam said 64 soldiers with little protection were killed as they tried to protect a flag on South Johnson reef – an incident still acutely felt in Hanoi.

In recent years, Vietnam has significantly improved its naval capabilities as part of a broader military modernization, including buying six advanced Kilo submarines from Russia.

Carl Thayer, an expert on Vietnam’s military at the Australian Defence Force Academy, said the deployment showed the seriousness of Vietnam’s determination to militarily deter China as far as possible.

“China’s runways and military installations in the Spratlys are a direct challenge to Vietnam, particularly in their southern waters and skies, and they are showing they are prepared to respond to that threat,” he said. “China is unlikely to see this as purely defensive, and it could mark a new stage of militarization of the Spratlys.”

Trevor Hollingsbee, a former naval intelligence analyst with the British defense ministry, said he believed the deployment also had a political factor, partly undermining the fear created by the prospect of large Chinese bases deep in maritime Southeast Asia.

“It introduces a potential vulnerability where they was none before – it is a sudden new complication in an arena that China was dominating,” he said.

(Additional reporting by David Brunnstrom in Washington, Michael Martina in Beijing and Martin Petty in Hanoi.; Editing by Lincoln Feast)