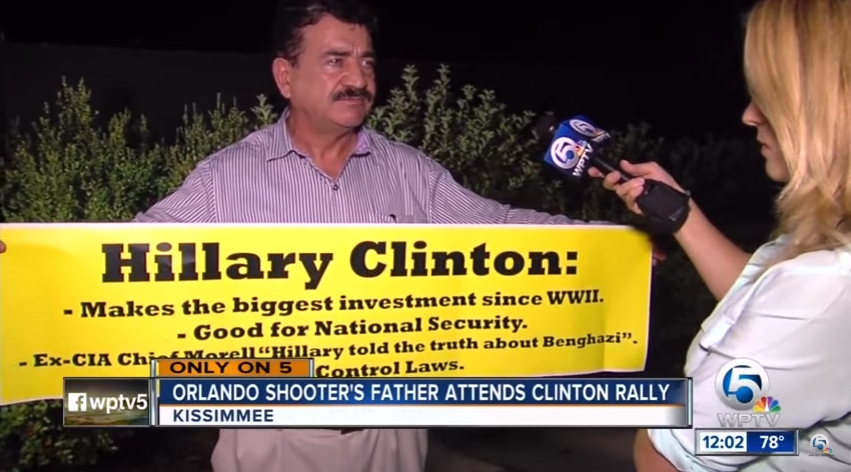 The 2016 election continues to get stranger and stranger. Like something out of a political satire film, just when you think the campaign season has reached a peak of absurdity, it gets even more ridiculous from there.

Take, for instance, the fact that Seddique Mateen — the father of Orlando nightclub shooter Omar Mateen — recently endorsed Hillary Clinton for a number of bizarre, almost ironic reasons. Mateen held a sign that claims Hillary told the truth about Benghazi, makes the biggest investment since World War II, and — most absurdly — will be good for national security.

Yes, a man who fathered one of the most horrendous monsters to ever step foot on American soil is speaking out about national security. That’s rich.

It’s not just that Seddique is the father of one of the most despicable human beings in our country’s history, though — he’s been the subject of controversy himself. Shortly after the Orlando shooting, it was revealed that Mateen had ties to radical Islamic groups and was the host of a suspicious and controversial television program.

There’s absolutely no reason that anyone would want to be associated with such a man, but there’s no doubt that Clinton supporters will defend this for completely arbitrary reasons. Of course meaningless words like “Islamophobe” will be thrown around freely in an attempt to discredit anyone who dares disagree with religious extremism and leftist authoritarianism.

If this is the kind of behavior that is going to become socially acceptable in American politics, then our country is in serious danger of collapsing. We’re at a major crossroads in American history where division seems to be the highest it has been in decades. We’re divided by race, gender, nationality, religion and political ideology. We’re no longer a melting pot that celebrates differences — we’re a divided nation that is in desperate need of coming together.

This election will be extremely telling of the state of the world to come.