Could solar panels in outer space power the whole Earth in the future? 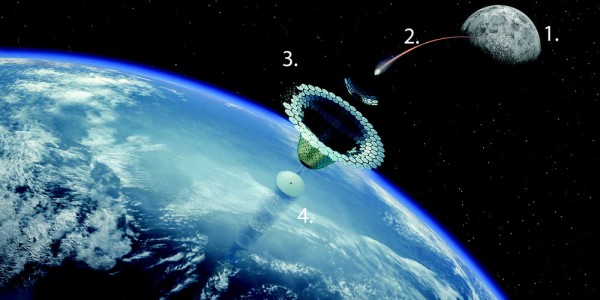 Space, the final frontier. Folks like Jeff Bezos, Elon Musk, Richard Branson and a thousand others in between and around NASA, are spending millions to hewn the road to space. Included in this mix is a young visionary from California named Justin Lewis-Weber. He’s not aiming for Mars, however. He’s proposing a plan to increase solar energy to planet Earth. How? Just put solar panels in space, and then have devices allowing them to self replicate on the moon. Popular Science reports:

“Currently a high school senior in California, Lewis-Weber has just published a paper in the journal New Space with what he thinks could be the solution to the upcoming energy crisis: putting self-replicating solar panels in space. These solar panels would to build copies of themselves, autonomously, on the surface of the moon. Then they would enter Earth’s orbit, collect the sun’s energy, and wirelessly beam it to the ground. Lewis-Weber’s paper builds on the work of John C. Mankins from Artemis Innovation Management Solutions.

“Self-replicating solar panels on the moon may sound like a crazy idea, but the notion of space-based solar power actually dates back several decades, gaining some steam during the 1970s oil crisis. It was set aside after oil prices went back down, but since then, two things have happened: One, the world has become a lot more desperate to solve climate change; and two, technological innovations have brought this crazy idea out of the realm of science fiction. The idea is gaining attention, and with some big investments, it’s possible that space-based solar power could become a reality within a few decades.”

“Satellites outfitted with solar panels would gather the sun’s energy 24 hours a day and then convert that energy into an infrared laser beam. The high-efficiency laser would transmit 80 percent of the captured energy to ground-based receivers; one design calls for 60-foot-wide laser beams and 9,700-square-foot ground-based receiving stations. If clouds hinder the beam from traveling though Earth’s atmosphere, the satellite could redirect the energy to other satellites or receivers in the network.”

And what about those self replicating robots on the moon? No problem, says Lewis-Weber

As reported by Popular Science:

“Earth orbit doesn’t have a whole lot of resources for building all those robots, so instead we could send the self-replicating machine to the moon, Lewis-Weber suggests. There, it could mine the soft lunar regolith for aluminum, iron, and silicon, to turn into parts for its solar satellite babies.

“Building self-replicating robots won’t be easy, but Lewis-Weber has a plan. The first step would be to simplify the solar panels’ design as much as possible. ‘Instead of having 1,000 different types of screws,’ he says, ‘let’s have five. Instead of having different molds for different parts, let’s have a 3D printer.’

“With about 18 different ‘species’ of factory machine, each one performing a simple task, such as producing screws or solar cells, it is theoretically possible to turn the moon into a self-sufficient solar cell factory.”

Self replicating robots don’t exist yet, but that’s not stopping Lewis -Weber. Neither is money. He estimates $10 billion will build sufficient solar panels to energize 150,000 homes. That’s not much.

Perhaps it’s all just a matter of time… and space.