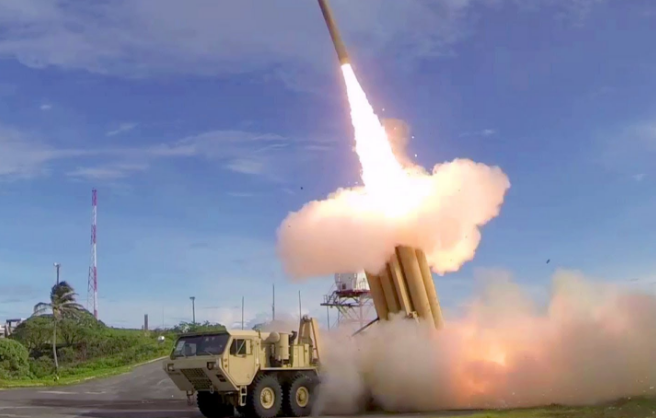 (NationalSecurity.news) The North Korean government issued a warning this week that it may retaliate in some manner if the Pentagon follows through with a plan to deploy an advanced missile defense system in South Korea.

As reported by Stars & Stripes, Pyongyang threatened to take a “physical counter-action” if the Terminal High-Altitude Area Defense System, or THAAD, was set up in the South as a bulwark against North Korean missile barrages.

Currently, North Korea is working to develop advanced, longer-range ballistic missiles, some experts say as part of Pyongyang’s nuclear weapons program. While the North has engaged in underground detonations of nuclear devices, thus far it has been unable to develop a means of mounting a nuclear weapon atop a missile.

North Korea vowed to “take a physical counter-action to thoroughly control THAAD, aggression means of the U.S. for world domination, from the moment its location and place have been confirmed in South Korea,” according to the state-run Korean Central News Agency.

The report cited the Artillery Bureau of the General Staff for the Korean People’s Army.

“The U.S. had better understand that the more massively it introduces war weapons to South Korea and its vicinity, the closer they will come into the firing range of the KPA and the more miserable end the U.S. will meet without even a moment to make a shrill cry,” said the report.

KCNA also lambasted South Korea for permitting the U.S. to deploy the system on its soil. Technically, the two countries are still at war following the 1950-53 conflict that ended only in an armistice, not a peace treaty.

“We once again warn the enemies that it is the steadfast will of the KPA to make merciless retaliatory strikes to reduce South Korea to a sea in flames, debris once an order is issued,” the report said.

The Ministry of Defense in South Korea was unfazed and said that the nation was ready to respond to any North Korean aggression.

“North Korea needs to clearly see who is responsible for putting the Korean peninsula’s peace and security at risk before criticizing the THAAD deployment decision,” ministry spokesman Moon Sang-gyun said in a press briefing.

“If North Korea continues its groundless claims and rash actions in defiance of our warnings, it will have to face our military’s stringent retaliation,” he added.

In addition, China has also objected to the deployment of THAAD in South Korea, fearing that the system’s radar could be used to track Chinese military movements.

“THAAD will not target any country other than North Korea and will not encroach upon the security interests of any third country. We have no reason to do so,” South Korean President Park Geun-hye said earlier this week. She insisted that THAAD is “purely a defensive measure.”

That said, deployment of the system comes at a time when China is rattling sabers following a ruling by an international tribunal that its outsized claims of territory in the South China Sea, well beyond the traditional 200-mile economic exclusion zone off its coastline, are illegitimate.

The tribunal, located in The Hague, Netherlands, ruled that China aggravated a growing dispute of territorial claims with its extensive construction of manmade atolls and islands that destroyed coral reefs and infringed on the Philippines’ exclusive economic zone, The Associated Press reported.

The ruling does not come with any force behind it, but it gives credence to countries in the region with competing claims on sections of the South China Sea.

“The Philippines strongly affirms its respect for this milestone decision as an important contribution to ongoing efforts in addressing disputes in the South China Sea,” Philippine Foreign Secretary Perfecto Yasay said in Manila, calling on “all those concerned to exercise restraint and sobriety.”

An editorial in state-run Chinese press said the ruling was part of a “U.S.-led conspiracy” and that Beijing would move to defend its sovereignty.

“The U.S. motives are apparent to the world, especially to the Chinese people. The current China is nothing like the country it was one hundred years ago. Any act that tries to violate China’s territorial sovereignty will fail,” the editorial said.

NationalSecurity.news is part of the USA Features Media network. Sign up to have our daily headlines emailed directly to you here.