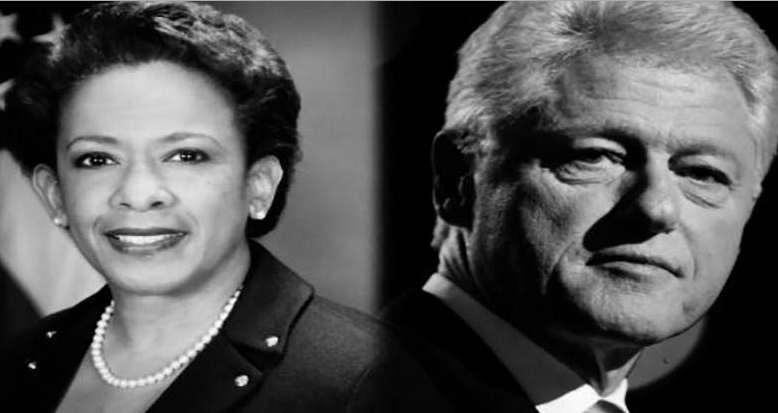 Yesterday’s mystery meeting on the tarmac between former President Bill Clinton and Attorney General Loretta Lynch has now been clarified.

Obviously, it wasn’t a social visit as Lynch publicly claimed, but an arrangement clarifying how the powerful Clinton dynasty would be kept above the law in the face of heated publicly scrutiny as Hillary Clinton seeks the presidency.

Instead, the Justice Department filed a motion that would keep from release thousands of emails potentially exposing conflicts of interest on the part of the Clinton Foundation and overlapping state department officials, such as Hillary’s chief of staff Huma Abedin.

As the Daily Sheeple reported:

Lynch attempted to meet secretly on her government plane while it was stopped at the Phoenix airport with Bill Clinton.

The unannounced meeting, which comes as Lynch’s Justice Department is investigating the handling of classified information on Hillary Clinton’s private email server, came to light only when Phoenix’s ABC15 TV station asked Lynch about it during a press conference, The Daily Callerreported.

Lynch preposterously claimed the investigation against Hillary wasn’t discussed at all, but instead they attempted to meet secretly on her plane just for a little random chit chat about golf and Clinton’s grandchildren.

Loretta Lynch, as the highest attorney in the land, publicly claimed:

But news today of the Justice Department’s filings – which would benefit the Clinton family’s foundation and candidacy by delaying the release of emails for another 27 months – make clear that Attorney General Lynch’s meeting with the former president was anything but social, and obviously all about an arrangement.

As The Daily Caller reported:

If the court permits the delay, the public won’t be able to read the communications until October 2018, about 22 months into her prospective first term as President. The four senior Clinton aides involved were Deputy Assistant Secretary of State Michael Fuchs, Ambassador-At-Large Melanne Verveer, Chief of Staff Cheryl Mills, and Deputy Chief of Staff Huma Abedin.

So, these two issues conveniently overlap on the same day, and we are to believe that nothing improper was going on?

At issue, of course, is the sophisticated way in which the family dynasty apparently used the foundation as a vehicle for quid pro quo exchanges, often with foreign diplomats, firms or leaders who may have contributed to the Clinton Foundation in exchange for favorable dealings in State Dept. dealings or other affairs.

It raises some keen questions about who Hillary Clinton really works for, and how her presidency might be run.

If the emails reveal what many critics think, it suggests corruption well beyond the ordinary scope of scratching the backs of campaign donors, to a back channel for private collusion and corrupt on behalf of potentially adversarial foreign governments.

The first Clinton presidency already had an intolerable amount of scandal, and Hillary would be bringing all that baggage back to the White House, and using it to set up shop.

Do they think they’re fooling anyone, or are they just indifferent to breaking the rules even out in the open?