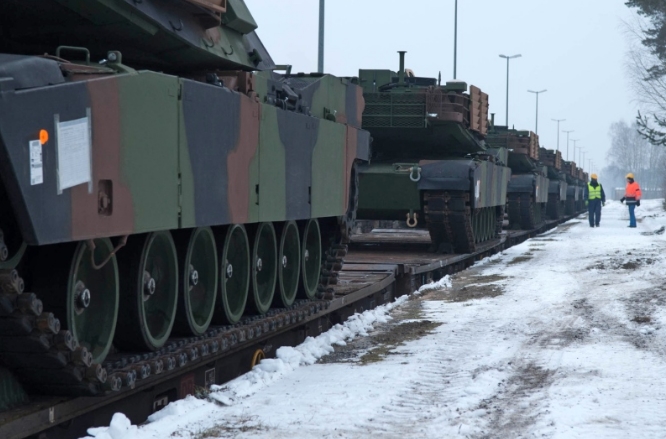 (NationalSecurity.news) NATO is preparing to send four “combat-ready” battalions to its perimeter with Russia, as a means of thwarting future aggression from Moscow and as a way of informing President Vladimir Putin that the forces he would face should he decide to do so can most definitely fight.

As reported by The Washington Post, NATO ministers have agreed in recent weeks to amass a contingent of 4,000 troops in Poland and the Baltic States, a decision that will likely agitate Moscow but one that was, nevertheless, in response to Russian aggression in the Crimea and Ukraine.

The same day of NATO’s announcement, which came last week, Russia launched a week-long series of snap readiness drills aimed at ensuring its forces were ready to mobilize quickly in the event of a conflict.

The Russian drills also came as NATO countries were preparing the largest military exercise in Poland since the end of the Cold War.

The plans to deploy the rotational force have been in motion since earlier this year. The troop contingent, composed of four battalions from the United Kingdom, Germany, the United States and one other country that hasn’t been announced will deploy throughout Lithuania, Latvia, Estonia and Poland sometime in 2017.

The Baltic States and Poland have all asked for a bolstered NATO presence in the wake of Russian action in Ukraine. Some in NATO and the U.S. were growing increasingly concerned that, if left unchecked, Moscow might begin pressuring the Baltic States – with force, even – to shift away from the military alliance and back towards Moscow.

After announcing the deployment of additional forces to the Baltic region, NATO Secretary General Jens Stoltenberg said the alliance would examine the possibility of letting Romania to command a multinational brigade within its borders, to enhance security on the resource-rich Black Sea.

“I welcome the commitments made by many allies today to contribute,” Stoltenberg told reporters following the announcements.

The additional forces are but one element to a growing number of deterrent factors that were announced at a 2014 summit in Wales that have been fully implemented in recent weeks, the secretary general said.

Those measures include a 40,000-strong quick reaction force and a spearhead task force that can respond to hot spots in just days.

Combined with an enhanced U.S. military presence, NATO’s forces are part of U.S. Defense Secretary Ash Carter’s new “NATO playbook,” which is aimed at shifting the posture of the alliance from “reassurance to deterrence,” the Post reported.