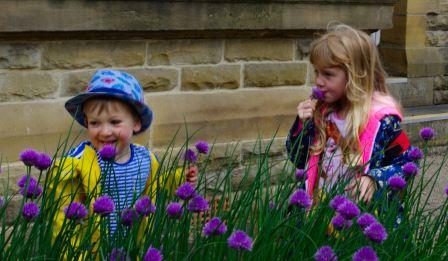 Imagine strolling down a local street and discovering fruit trees, vegetable plots, herbs, and flowers sprouting around government buildings, school campuses, private businesses, even by the local police station. Then, imagine that these organic foods are to be publicly shared. The town called Tomorden, England began their transformational food journey in 2007. It is still going strong, building community, the local economy, and, most of all, reinvigorating the health and love of  townspeople. Natural News reports:

It is a program called Incredible Edible, which was founded by Mary Clear, a local grandmother of ten, and Pam Warhurst, former owner of a local restaurant in town known as Bear Cafe. The duo had a shared goal of making Todmorden the first town in the UK to become completely self-sufficient in food — and their endeavors have been successful, at least as far as keeping up with demand for produce from locals who want it.

Pam Warhurst, a co-founder of Incredible Edible , shares the many astonishing benefits from her Ted Talk:

While some were concerned that people might vandalize garden plots, or stir up jealousies in the neighborhood, co-founder Warhurst reports that the positives far outweigh any negatives, as Natural News reports:

“If you take a grass verge that was used as a litter bin and a dog toilet and turn it into a place full of herbs and fruit trees, people won’t vandalize it. I think we are hard-wired not to damage food,” said Warhurst, concerning the notion that offering free fruit and vegetables might lead to abuse or other crimes. She noted, in fact, that quite the opposite has occurred — the Incredible Edible program has improved community relations, and reduced crime by an incrementally higher amount every single year since it first started.”