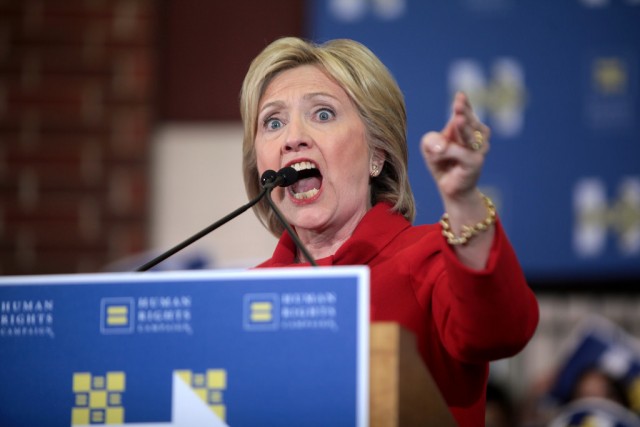 In almost the same [short] amount of time it took President Barack Obama to demonize American gun owners following the latest terrorist attack on U.S. soil – the second one in less than six months that his administration failed to identify and stop – his chosen successor, likely Democratic presidential nominee Hillary Clinton, waxed nostalgic for the bad old days of her husband’s presidency.

Hillary has called on Congress to reinstate the 1992-era “assault weapons” ban, which was (and remains) misnamed because American citizens then and now cannot own true assault weapons without a special government license (which is expensive), following the attack by an ISIS loyalist who killed 50 and wounded 53 more at a gay nightclub in Orlando, Fla., over the weekend.

“We did have an assault weapons ban for ten years,” she told CNN’s Chris Cuomo. “I think it should be reinstated.”

Then, during an interview with the Today Show, she added, “Let’s keep weapons of war off our streets like the one that was used in Orlando,” Breitbart News reported.

Actually, the rifle used in Orlando – an AR-15 – is a civilian semi-automatic version of the U.S. military’s actual assault rifle, so no, it’s not the same. And outside of them being used in mass shootings, these rifles kill almost no one in America every year, according to FBI statistics. In fact, knives kill more people a year than military-style semi-autos, and of the other gun-related deaths in the U.S. annually, two-thirds of them are suicides. What’s more, the decade-long ban Hillary’s husband and a Democrat-controlled Congress enacted (are you seeing a pattern here?) had no negligible impact on crime or shootings.

And to add to this, Clinton’s misguided and just plain wrong criticism is stupid, politically. She also criticized Florida’s gun laws – a swing state she desperately needs if she is to win in November – for not doing more to regulate assault weapons, as well as 50 caliber rifles and large-capacity magazines.

In addition, she also blamed the Sunshine State for failing to require residents to obtain government permission, via a “permit,” before being able to enjoy their Second Amendment right to keep and bear arms for self-defense (and the defense of a nation); for not requiring that all weapons be registered to the government (so the state can confiscate them later, mind you); and for not requiring owners to obtain a government license to carry a shotgun or a rifle.

“We know the gunman used a weapon of war to shoot down at least 50 innocent Americans and, you know, we won’t even be able to get the Congress to prevent terrorists or people on the no-fly list from buying guns,” she said.

Granted, the GOP-led Congress has blocked Democrat efforts to deny due process to people the FBI only suspects of being tied to terrorism by blocking their attempts at introducing legislation that would deny these Americans the same right to keep and bear arms. If the FBI really believed such people were terrorists they would build a case against them and arrest them – right? Don’t expect the compliant Left-wing media to pose that question to their beloved candidate.

“Yes, there is a right for law-abiding, responsible Americans to own guns and, yes, there are reasonable common sense measures to try to keep people safe from guns,” she said. “We have to figure out the best way to move forward on that. That’s what I’m committed to doing.”

By the way, “reasonable common sense measures” are code words for, “We want to take more of your guns away.’

The “gun lobby” and the large plurality of American gun owners who are engaged in the enjoyment of their Second Amendment rights are not the ones who have blood on their hands. No, left-wing sycophants like Hillary Clinton, her one-time boss Barack Obama and his handpicked Cabinet members Loretta Lynch of the Justice Department and Jeh Johnson over at DHS do, for the gaggle of them have been following the president’s agenda to the letter in downplaying any Islamic terrorist threat to American citizens. After San Bernardino the president should not have blabbed on about guns, he should have ordered the FBI and DHS to redouble their efforts to root out ISIS sympathizers and other radicalized Muslims by whatever legal, constitutional means possible. Instead, he doubled down on excusing Muslim radicals by blaming guns, people who own guns and everyone else politically opposed to him.

But not the terrorists. That’s not just disgusting, that is a major dereliction of duty.

Donald J. Trump, the presumptive GOP presidential nominee, is right. If Obama had one ounce of statesmanship and honor he would resign immediately. Alas, though, we all know he won’t do that because he thinks we are the problem, not him.

Neither are Islamic extremists apparently.