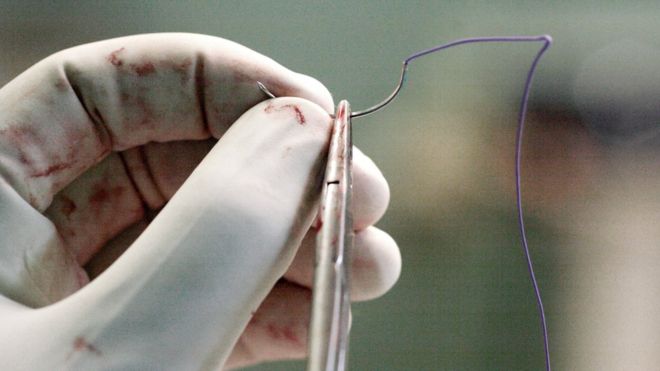 Would you trust a surgeon or a robot with your life? Recent events suggest you should prefer the latter. A piece of technology known as the Smart Tissue Autonomous Robot (STAR) did a better job at stitching a pig’s small intestines than human surgeons who performed the same task.

The creators of STAR do not claim robots will replace surgeons; however, they do see robots playing an increasing role in the surgery room. “Even though we surgeons take pride in our craft at doing procedures, to have a machine that works with us to improve outcomes and safety would be a tremendous benefit,” said pediatric surgeon and team researcher, Peter Kim.

STAR was developed by researchers at Children’s National Medical Center’s (CNMC) Sheikh Zayed Institute, and successfully stitched together parts of a pig’s intestine in a living animal with very little to no human intervention, according to an article in Scientific American.

The soft tissue surgery performed is known as an intestinal anastomosis, and is particularly difficult for robotic systems because the tissue shape morphs and moves during the procedure. Although STAR is not completely autonomous, the robot was able to perform the surgery with the use of a near-infrared fluorescent imaging system, a force sensor and algorithm to specify the correct kind, tension and place of the stitches.

In the experiment, the researchers put markers in the intestinal tissue of a pig. STAR’s imaging system kept tabs on their location during the surgery. The robot performed the surgery, as did various surgeons. The researchers then compared the stitches sewn by STAR to the stitches sewn by human surgeons. The team found that STAR’s stitches were more consistent and less susceptible to leaks than the surgeons’ stitches.

“Our results demonstrate the potential for autonomous robots to improve the efficacy, consistency, functional outcome and accessibility of surgical techniques,” Kim said in a press release. “The intent of this demonstration is not to replace surgeons, but to expand human capacity and capability through enhanced vision, dexterity and complementary machine intelligence for improved surgical outcomes.”

Robot-assisted surgeries (RAS) have become more and more commonplace in hospitals. Until STAR came along, however, soft tissue surgery was almost completely manual because they demand surgeons to make frequent adjustment.

“Until now, autonomous robot surgery has been limited to applications with rigid anatomy, such as bone cutting, because they are more predictable,” noted Axel Krieger, PhD, Assistant Professor at Children’s National Medical Center, in a press statement. “By using novel tissue tracking and applied force measurement, coupled with suture automation software, our robotic system can detect arbitrary tissue motions in real time and automatically adjust,” he added.

The researchers claim the experiment was executed to serve as a proof that autonomous robots could successfully perform soft tissue surgery. Although STAR is not yet autonomous, the researchers hope this technology will be incorporated into commercial devices in the coming years.

“Now driverless cars are coming into our lives,” Kim said.“It started with self-parking, then a technology that tells you not to go into the wrong lane. Soon you have a car that can drive by itself.” By the same token, Kim argued that surgical robots could get their foot in the operating room by assisting surgeons and perhaps, one day, make surgeons obsolete.