Being undocumented is a ‘bragging right?’ UT student boasts on Twitter about her 4.5 GPA, full-paid tuition and her legal status 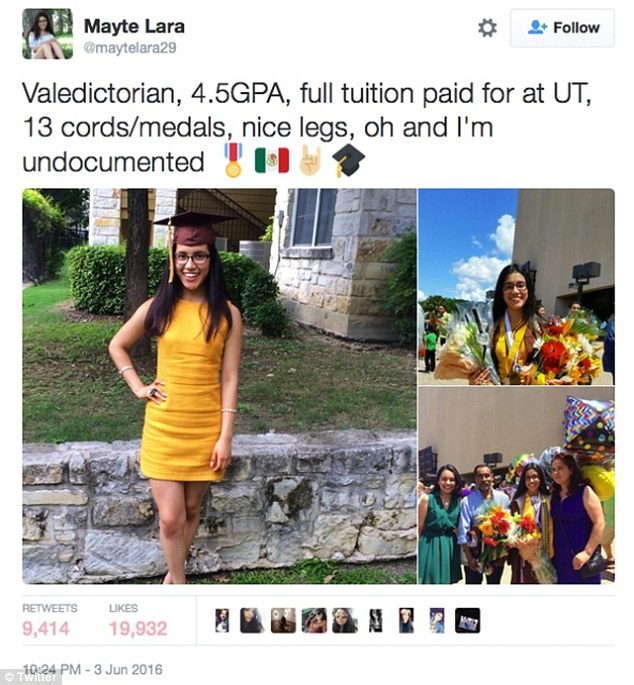 Have you ever said something that you instantly regretted? Maybe you made an inappropriate joke during a classy dinner party. Maybe you told your boss how you really felt. Or maybe, like in the case of Mayte Lara, you sent a tweet.

There’s little doubt that when the recent graduate of Crockett High School in Austin, Texas tweeted photos of her graduation day along with the caption, “Valedictorian, 4.5 GPA, full tuition paid for at UT, 13 cords and medals, nice legs, oh and I’m undocumented,” she was not prepared for the consequences.

The tweet immediately went viral, with many criticizing the fact that an illegal immigrant was receiving a full-ride scholarship from an American university, and justifiably so. For every illegal immigrant that receives a scholarship – that’s one American citizen that doesn’t. Lara instantly regretted her decision; referring to the influx of responses she received from strangers on the internet as “scary.” As more and more people came across the tweet, her mentions filled with jokes about Donald Trump, deportation and an abundance of politically incorrect memes.

She later deleted her Twitter account as a result. Perhaps she should’ve respected the fact that there are consequences for your actions, and attempting to compile cool points on the internet has a way of backfiring in viscous fashion. If there’s one thing liberals have yet to discover, it’s that acting edgy via social media almost never pans out the way they intend it too.

Now that the fiasco is well-publicized news, you have to wonder how the University of Texas – where Lara humble-bragged about receiving paid tuition – will react?

There’s no doubt that Lara learned many extremely important lessons from the entire ordeal, but few are likely more important than the fact that bragging doesn’t get you anywhere good. In some instances, it just might get you deported.