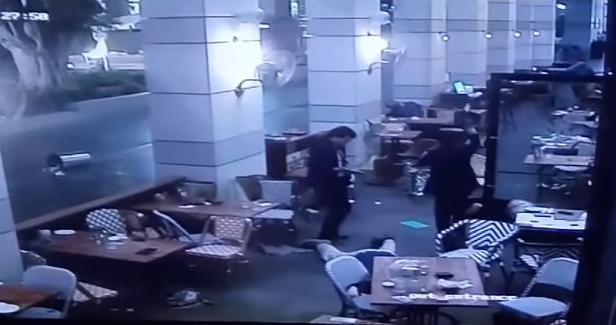 One terrorist can be seen gunning down a diner at point blank range. The two assailants continue to shoot at civilians inside the restaurant as the patrons try to flee, with other people seen being shot to the floor.

Toward the end of the brief footage, one of the terrorists is seen throwing his gun at the body of a victim and the two shooters flee the scene.

A second surveillance video from the front of the restaurant shows diners leisurely eating until the attack begins. Patrons then furiously dash for the door, some knocking over chairs on their way to the exit.

The two attackers today are reportedly relatives – either brothers or cousins, depending on the report – who hail from Yatta, a village south of Hebron.

The attack took place inside the Max Brenner restaurant, a dessert shop and restaurant chain famous for its chocolate dishes.

The restaurant is located in the Sarona Market, an upscale dining and shopping market located near one of the busiest intersections in Tel Aviv. It’s around the corner from an entrance to Israel’s Ayalon Highway and about three city blocks from the Israel Defense Forces main headquarters in Tel Aviv.