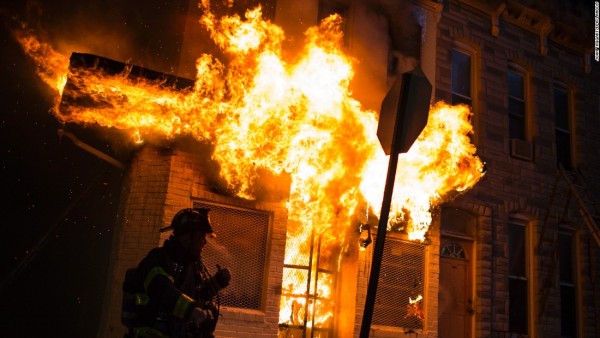 The United States, as the world’s preeminent economic and military power, is also, in many ways, the world’s most vulnerable society, for most of our citizens have grown accustomed to a higher standard of living than almost most every other nation.

And this soft underbelly of society would be exposed in a dramatic – and deadly – way if a cataclysmic event were to occur, say a massive economic collapse.

In fact, notes “V, the Guerrilla Economist” in an interview with radio host Greg Hunter of USA Watchdog, that is probably the most likeliest of disaster scenarios facing the United States as we prepare to transition out of the chaotic Obama years.

Already China and other nations are positioning their currencies to rise with the fall of the petrodollar, the latter of which is based primarily on U.S. military hegemony the world over. But that is an empire of illusion that cannot sustain itself forever, and in fact is now being threatened by other great powers’ aggressiveness on the world stage. If the dollar were to somehow lose its status as the world’s reserve currency, being replaced by a basket of other currencies that may generally favor regional alliances millions of Americans who have yet to position themselves financially for such a downturn are going to suffer immensely.

In his interview, “V” says he was having a recent conversation with “seven of the smartest guys” in the country, to include financial, military and foreign affairs experts, and he posed the question to them: What does an economic collapse in the U.S. look like?

“The initial answer that all of them were unanimous in telling me, ‘You can expect anywhere between 25 and 50 million dead in the first 90 days.’ I almost fell off my chair when I heard that, and I said ‘what do you mean?’ They said, ‘V, it’s real simple. You’ll have people dropping dead from violence, looting, rioting, right? You’ll have people dropping dead from lack of medication because we’re the most medicated country on the planet. You’ll see people drop dead from starvation, dehydration and disease.’”

He went onto single out the major urban population centers in the U.S. such as New York City, home to 8 million people – city centers that, as reported by Bugout.news, depend on a food supply chain that is extremely fragile and highly vulnerable to any disruption.

“’I for the life of me cannot understand why the terrorists have not, you know, attacked our food supply, because it is so easy to do,’ former Health and Human Services Secretary Tommy Thompson once observed, the site reported. In addition, U.S. Sen. Susan Collins, R-Maine, has also observed, ‘In the war on terrorism, the fields and pastures of America’s farmland might seem at first to have nothing in common with the towers of the World Trade Center or busy seaports. In fact, however, they are merely different manifestations of the same high priority target, the American economy.’”

As for the other conditions mentioned by the experts V consulted – lack of preparedness, disruption of the medical chain, rioting – these, too, would also worsen by the day.

“You’re not going to be able to go to the supermarket” for anything, he warned, the gas stations will be empty, the power grid will fail, and the misery and death toll will spread.

As to his personal plan of action, V says he wants to leave the country and wants to do so – where he’ll be “sitting on a beach” – before 2017.

No one knows when a collapse will occur or what will ultimately trigger it, but it is hard to imagine a time in recent history, save for the period before World War II, when the globe was as unsettled and frenetic as it is now.