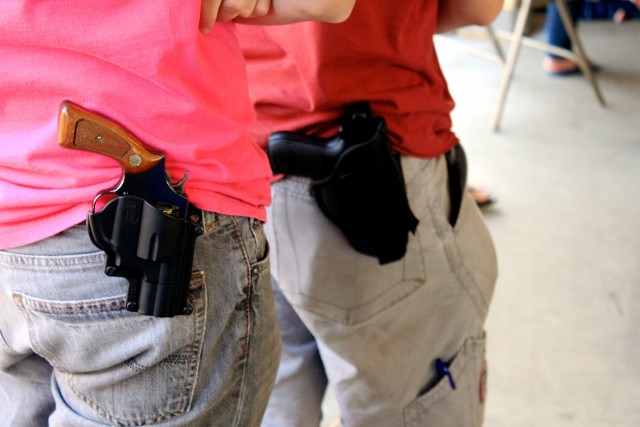 To hear Left-wing politicians and activists tell it, Americans don’t need firearms for self-defense because a gun is so seldom used for that purpose and besides, as long as we have police, government and the military, what is there to fear?

But in reality, throughout human history Man (and woman) has used some form of arms – the latest and greatest technology, whether that was a bow-and-arrow or an early flintlock rifle – for protection.

And as far as the Second Amendment goes, our founding fathers not only understood this necessity, they knew that it was a natural right for humans to use the most modern means to defend themselves, their homes and their nations, if need be. That’s why they called it an “inalienable right.”

But this indisputable fact remains under assault in today’s America by would-be authoritarians and their legions of useful idiots who have been brainwashed into believing no such natural right exists. To them the individual asserting authority over his or her person is not merely a nuisance to them but an obstacle to be successfully negotiated or, better yet, eliminated.

Government of, by and for the people has become domination, coercion and submission to the State. The inarguable linkage that private gun ownership has given pause to the most abusive authoritarianism, has served this nation well. Since the founding of the country, the clear lesson of history, that an armed population counteracts and checks the effective ambition of despots, protected our liberty.

One of the most blatant gun-grabbers, Democratic Sen. Barbara Boxer of California, got to experience first-hand why individuals should have the means and the know-how to protect themselves. But instead, she completely whiffs on the realization.

During a recent on-stage appearance at a rally for Democratic presidential contender Hillary Clinton, she was besieged by angry supporters of Sen. Bernie Sanders, who is competing with Clinton for the nomination.

“It was a scary situation,” Boxer told CNN, as reported by CNSNews.com. “I was there… It was frightening. I had – I was on the stage and people were six feet away from me and if I didn’t have a lot of security, I don’t know what would have happened.”

Would that be the armed police officers at the scene, Sen. Boxer, who are armed to not only protect the public but themselves? Did you ever ask yourself, Sen. Boxer, why you think it’s okay for some members of our society to be armed for protection or, better yet, why you think to do so we should have the government’s permission – when our founders clearly did not believe that?

After receiving the endorsement of the National Rifle Association for his unequivocal support for the constitutional right to keep and bear arms, he made the distinction between him and his likely opponent equally clear, as reported by The New York Times:

“Crooked Hillary Clinton is the most anti-gun, anti-Second Amendment candidate ever to run for office,” he said.

In addition, the paper noted, Trump went on to accuse Clinton of wanting to let violent criminals out of prison, which is the same as what Obama wanted, and “disarm” law-abiding citizens in unsafe neighborhoods, while warning that women, in particular, would be at greater risk if she were elected president.

Awr Hawkins, writing at Breitbart News, makes all of these points well, noting that gun ownership is a natural, not political, right:

“Therefore, natural rights are not political inasmuch as they exist with or without the consent of those in political office – such rights even exist without the citizens’ consent – and the Founding Fathers gave us the Bill of Rights to protect them.

“So the lesson for incoming officeholders is simple – gun rights are not like speed limits, school funding, defense spending, or treaties with foreign countries. The government’s role is not to regulate such rights but to protect them in accordance with the Constitution. This is what our Founders meant by the words, ‘Shall not be Infringed.’”