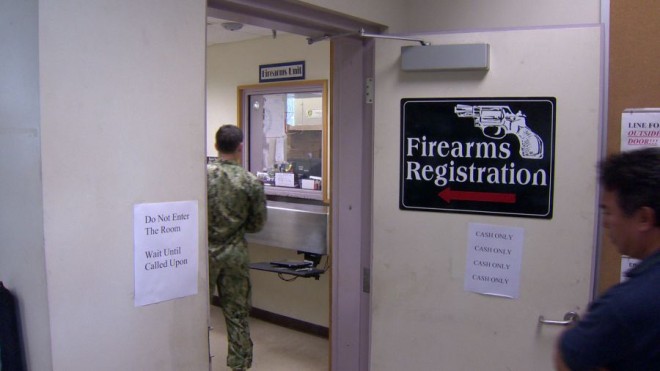 Hawaii is a state that is as liberal as they come and a recent piece of legislation that was recently introduced by state Senator Will Espero (D) is seeking to violate the rights of the people to keep and bear arms by entering gun owners into a national gun registry.

Hawaii could become the first state in the United States to enter gun owners into an FBI database that will automatically notify police if an island resident is arrested anywhere else in the country.

Most people entered in the “Rap Back” database elsewhere in the U.S. are those in “positions of trust,” such as school teachers and bus drivers, said Stephen Fischer of the FBI’s Criminal Justice Information Services Division. Hawaii could be the first state to add gun owners.

“I don’t like the idea of us being entered into a database. It basically tells us that they know where the guns are, they can go grab them” said Jerry Ilo, a firearm and hunting instructor for the state. “We get the feeling that Big Brother is watching us.”

Supporters say the law would make Hawaii a leader in safe gun laws. Allison Anderman, a staff attorney at the Law Center to Prevent Gun Violence, said the bill was “groundbreaking,” and that she hadn’t heard of other states introducing similar measures.

Sen. Will Espero, who introduced the bill, and the Honolulu Police Department said Hawaii could serve as a model for other states if it becomes the first to enact the law.

The problem in all of this is that first, it is a right to keep and bear arms, not a privilege (See the Declaration of Independence). Second, there is no necessity to be entered into a gun registry whether it be with the DC government, the state or local levels in order to exercise that right. Third, it has been historically know that gun registration always leads to gun confiscation. Just take a look at what Germany did with gun laws and how the people suffered because of it.

Kenneth Lawson, faculty at the University of Hawaii’s William S. Richardson School of Law, said, “You’re curtailing that right by requiring that a name be entered into a database without doing anything wrong.”

That is exactly what is happening, which is a violation of the Second Amendment, which Senator Espero swore and oath to uphold. However, sacred oaths mean nothing to Communist ideologists like Senator Espero and others.

J. E. Dyer makes a very important point about gun registration that many people do not understand. She writes, “Registering guns is about registering the people.  It’s not the guns the authorities care about; it’s disarming the people who possess them — or treating those people differently.  Under Hawaii’s law, it’s not ‘your gun’ that will be registered with the FBI.  It’s you.”

As Bob Owens rightly points out, “Our Founding Fathers stockpiled arms precisely because of concerns over a government that was becoming increasingly restrictive, tyrannical, and paranoid, and which was slicing away human rights and personal dignity more every day. They were eventually forced into the Revolutionary War when the federal government launched a gun control raid on Lexington and Concord on April 19, 1775.”

This is exactly why this kind of thinking should be rejected. It is not law. It is tyranny masquerading as law. In my opinion, Senator Espero needs to be removed from office, along with anyone that would support such a measure and brought up on charges of crimes against the people he is supposed to serve.