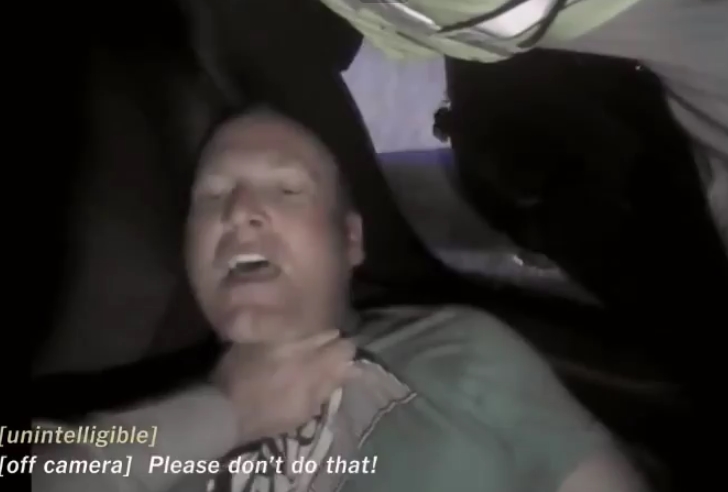 Minutes after a handcuffed man was shocked to death by Taser guns in front of his family by Georgia police officers, cops high-fived each other and reassured themselves that they wouldn’t lose their jobs, chilling new police video shows.

The cops’ callous reaction was captured on body cam footage that shows the November death of Chase Sherman, 32, who was Tasered 15 times by two Coweta County Sheriff’s deputies after having a psychotic episode from “spice,” or synthetic marijuana, in the back of his family’s rental car.

“You actually see a man get tortured to death for four minutes,” L. Chris Stewart, the Sherman family’s attorney, told the Daily News, a day after he viewed the horrific video for the first time. Sherman’s family have fought for the video’s release in an attempt to bring charges against officers.

Moments after Sherman dies, as his stunned family stands on the side of the highway, cops are heard fearing for their jobs.

“Naw, you’re good,” the other officer reassures him with a smirk, one of the two body cam videos show. Sometime after Sherman’s body is loaded into the ambulance, two officers are seen high-fiving (at the 9:25 mark in the Daily News edited video.)

“It’s absolutely horrific. It’s probably one of the most interesting case studies in how officers react in situations like this,” Stewart said.

Sherman died on Nov. 20, 2015 after his family called 911 while they were driving back home to Destin, Fla. from Atlanta, Ga.. The family was returning from Sherman’s brother’s wedding in the Dominican Republic.

Sherman started behaving erratically and was trying to leap out of the SUV from the back seat, apparently from a reaction to the drug he had taken days earlier, family said.

Sherman’s family, which included his fiancée, Patti Galloway, and his parents, Kevin and Mary Ann Sherman, hoped the cops would get medical care for the hallucinating man but instead watched as they repeatedly shocked him, beat his head and sat on him.

“No! You’re not gonna shoot him! You hear me?” Mary Anne Sherman is heard pleading with the deputies inside the car, before being asked to leave the vehicle.

Sherman initially resists cops’ attempts to arrest him and repeatedly grabs their Taser guns, according to the chilling video.

The crazed man’s family watches in horror as the officers shock him with their Taser guns and beat him against his head.

After tussling with the cops for a few minutes, Sherman relents and declares “O.K. I’m dead, I’m dead” and “I quit, I quit.”

The two sheriff’s deputies, identified as Samuel Smith and Joshua Sepanski, continue shocking him with Taser guns and sit on his back while he is handcuffed and face down on the floor of the car.

Sherman is heard crying in anguish as EMTs and police officers sit on top of him: “I got all the weight on the world on him now,” an EMT is heard saying in the footage.

Sherman’s death was ruled a homicide “during an altercation with law enforcement with several trigger pulls of an electronic control device” and “compression of the torso by the body weight of another individual,” according to his death certificate.

None of the cops were suspended for the incident, and continue to work for the department, Stewart, the Sherman family’s attorney told The News.

The family plans to bring a lawsuit against the Coweta County Sheriff’s Office and the EMTs and hopes the new video will prompt an investigation by the Justice Department, Stewart says.