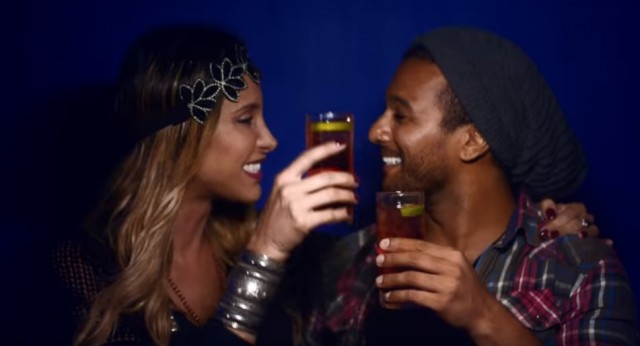 Though transgender individuals constitute just 0.3 percent of the U.S. population, one of the worlds’s leading vodka brands felt compelled to incorporate transgenderism in the marketing of its liquor.

Absolut Vodka launched a new commercial this month encouraging vodka drinkers to throw away their inhibitions about transgenders and accept them for who they are, even if it’s your male buddy turned female.

The commercial begins by showcasing a man having a great time at a concert, enjoying the music, the dancing and the laughing. Suddenly, he spins around and sees his friend Dave. But Dave is no longer Dave.

In fact, Dave is now Darla, a transgender woman with long dirty blonde hair wearing flowered jewels around her head.

“I tried to make an excuse to get away,” he said. “Then she grabbed my hand. Next thing I know we’re running to see this DJ. Darla knew somebody and suddenly we’re backstage drinking Absolut Seabreezes. We went to this party and we watched a parade. We took a million pictures in this photo booth.”

The guy featured in the advertisement continues to be understanding about his friend’s transition, adjusting to the changed immediately. In fact, it almost appears as if the two are having an intimate connection.

“We walked and she told me she always felt this way,” he said. “I just listened and somehow I understood. Darla knew everybody, she was amazing. Later the two of us took a walk and we watched the sun come up. She talked about her journey. She was my friend, the same person the same heart.”

The video ends with the two embracing one another as the sun rises in the background, sharing a rather intimate moment. “She hadn’t changed, I had,” he says. “Thanks for bringing me back, Darla.”

Why is the establishment pushing transgenderism?

Though there’s no shame in being transgender, one has to ask why a major liquor retailer such as Absolut Vodka would want to expend resources catering to a minute portion of its consumer base. Remember, transgender individuals literally make up a fraction of a fraction of the U.S. population.

But then again, that hasn’t stopped the government from intervening in the push to advance bathroom rights for transgender Americans. President Obama recently unveiled new guidelines requiring schools to allow transgender children to use the restroom or locker room that fits their chosen gender.

So is transgenderism simply the new trend? Or is there something deeper going on here? Perhaps it’s the latest form of indoctrination? This idea that everyone must be catered to and included no matter what their differences are sounds really good, but the reality is it’s not about social justice, but more about the suppression of all civil liberties.

What happened to private property rights?

Regarding the transgender bathroom debate, which has shockingly become the nation’s most hotly debated topic, Ron Paul highlights what everyone seems to be forgetting, and that is the rights of private property owners.

“The two sides of the debate both believe that government has the legitimate authority to tell private businesses who they should allow to use their facilities. Few on either side of this debate defend the right of private property owners to decide for themselves who may and may not use their bathrooms,” Ron Paul wrote in his Liberty Report.

“Some say government must be involved in this issue in order to ensure that private businesses do not violate individual rights. Those who make this claim are accepting the idea that rights are no more than a gift from the government that can be revoked at the will and whim of legislators and bureaucrats,” he continues.

“This argument turns rights from a shield protecting our liberties into a sword that can and will be used to increase government control of our lives,” according to Paul.