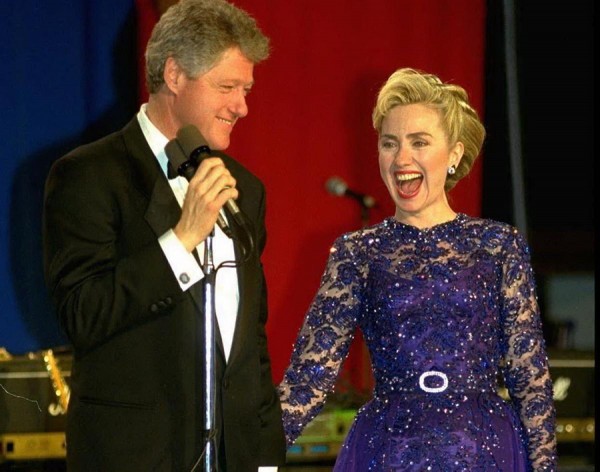 “The only difference between Bill Cosby and Bill Clinton is Cosby drugged his victims, Bill preferred to physically overpower them. That was his M.O.,” Stone said.

On the campaign trail Hillary likes to portray herself as a champion of women and, specifically, an advocate for protecting women from sexual assault and harassment. She has insisted that every accuser who comes forward with allegations has “the right to be believed.”

But she didn’t always feel that way, especially when her political future was threatened by her husband’s serial infidelities. As the Washington Times reported, 25 years ago Clinton took a different stance as the first lady, leading efforts to discredit any woman (and there were several) who came forward with their own stories of being harassed or assaulted, sexually, by Bill.

Campaign narratives written by reporters detailed how she honchoed the campaign team that handled “bimbo eruptions,” digging up personal papers and official records that could be used to undercut the stories told by a series of women. One top aide later recounted Mrs. Clinton’s intent to “destroy” the story of one accuser, while former adviser Dick Morris said Mrs. Clinton engaged in “blackmail” to try to force women to recant their stories.

“This isn’t about indiscretions or marital infidelity or adultery or girlfriends. It’s about sexual assault or rape,” Stone said. “These women are not going to be silent and, if I may paraphrase Hillary, they deserve to be believed.”

He said that CNN and other mainstream media outlets have been regularly censoring news about the Clintons and their treatment of Bill’s accusers, alleging, “they literally pull the cord on your microphone.”

They want to define this narrative as being about marital infidelity or adultery, that way people can say, ‘Oh well, that’s their business.’ They recognize that voters will accept that, as they have in the past, but they won’t accept the idea that Bill Clinton has assaulted women. But far more troubling, it’s Hillary Clinton who bullies and intimidates and degrades the women after they’ve been abused by her husband.

The Times noted there is a disconnect between the Hillary Clinton campaign and the candidate’s own past, but it has already become an issue, in large part driven by her likely GOP rival in the fall, Donald Trump, who has vowed to make her behavior and her husband’s an issue.

Also, the women who lodged complaints against Bill Clinton are also intent on making sure his wife has to answer for her actions.

“Was dreading seeing my abuser on TV campaign trail for enabler wife but his physical appearance reflects ghosts of past are catching up,” Juanita Broaddrick, who in 1999 accused Clinton of having raped her decades earlier, tweeted last week.

The following day she wrote, “I was 35 years old when Bill Clinton, Ark. Attorney General raped me and Hillary tried to silence me. I am now 73 it never goes away.”

Also, Paula Jones, who successfully sued President Clinton for sexual harassment, winning an $850,000 out-of-court settlement to drop the case, said earlier this month that Hillary enabled her husband in his abuse.

“Well, she stood by her man, all right. And she allowed her husband to abuse women, to harass women, possibly other things that he did wrong to women. And she allowed it to happen. As a matter of fact, she would go out and she would try to discredit these women, including me,” Jones told Breitbart Radio.