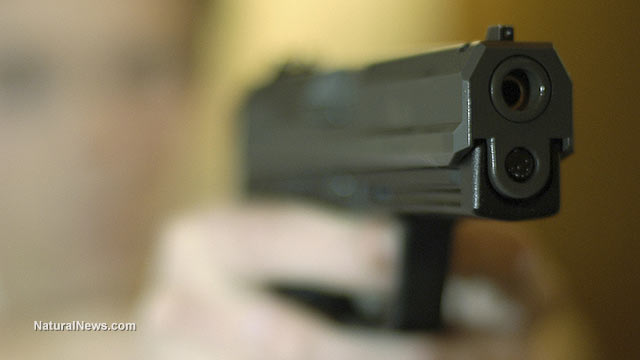 Liberals and other opponents of the Second Amendment like to counter the claim that a gun in the hand of a good guy can be employed to stop a bad guy with a gun from doing bad things.

Indeed, President Obama is the latest high-profile American to counter that notion. During a recent “townhall-style” event hosted by CNN, held to justify his latest executive gun control actions, Obama said in response to a rape victim who said that she now has a firearm to protect herself:

“There are always questions as to whether or not having a firearm in the home protects you from that kind of violence. And I’m not sure we can resolve that — people argue it both sides. What is true is that you have to be pretty well-trained in order to fire a weapon against someone who is assaulting you and catches you by surprise. What is also true is always that possibility that firearm in the home leads to a tragic accident.”

‘If it saves even one life…’

In fact, it is not speculation that firearms are the great equalizer when it comes to preventing horrific criminal acts. Studies have shown that guns are used hundreds of times each year to protect life and limb, and not just that of the bearer but others who were not armed themselves but were about to be victimized by a bad person with a firearm.

According to an analysis by The Daily Caller, citizens exercising their Second Amendment rights, and acting within local ordinances governing concealed carry of firearms, used their guns to save at least 283 potential victims between July 2014 and July 2015.

The analysis was completed as Obama was announcing his latest gun control executive actions, which he said were aimed at curbing gun-related violence. In doing so, he used another figure the anti-gun Left loves to cite out of context – that there are more than 30,000 gun deaths per year, but without noting that two-thirds are suicides, some 6 percent of homicides are gang-related, accidents account for 3 percent of gun deaths, and most of the remainder occur in urban regions.

As further noted by The DC:

“[The Daily Caller News Foundation] analyzed 195 random incidents where gun owners used firearms to save their lives, and often the lives of others. We wanted to know, not just how many perpetrators were killed, but how many potential victims were saved.”

An interactive graphic of the research findings is available here.

Of the nearly 200 cases analyzed, citizens carrying a firearm managed to save at least 283 potential victims, ranging from a man protecting his family from thugs to a semi-automatic pistol-carrying grandmother who managed to ward off a burglar in her home.

One case, for example, involved four men who wore masks and brandished weapons, in the planned burglary of a home in Melbourne, Fla., in June 2015. When one of them entered the home, he held a woman and her child at gunpoint. As the woman shielded the child with her own body, the homeowner, a male, presented his own firearm and took aim at the robbers, injuring one. Three victims were spared in that instance alone.