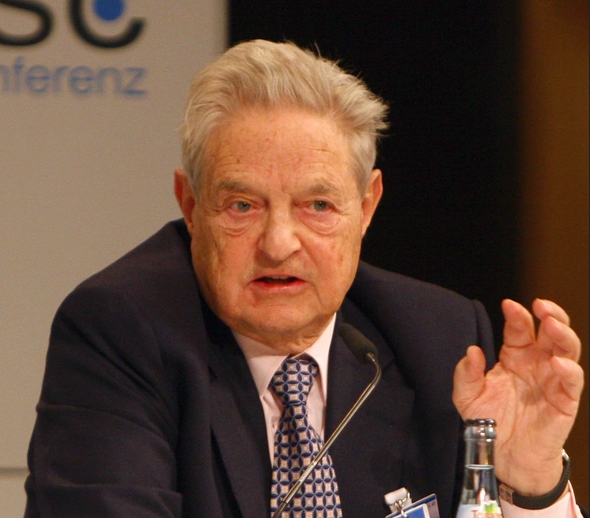 Anyone who’s done his homework on the matter knows that the so-called “Islamic State” is, at best, the fallout of failed Western policies abroad, and at worst, an intentional creation of the West or Persian Gulf states to fuel further destabilization efforts throughout Europe and the Middle East. And from the looks of it, the latter seems to be the more accurate descriptor for ISIS’ existence, with none other than billionaire George Soros pulling the strings of this group’s actions from behind the veil.

Soros has been exceptionally vocal lately in his condemnation of Russian President Vladimir Putin, whom he blames for destabilizing Syria and foisting millions of Syrian refugees on the West. But as delineated by RT.com’s Sam Gerrans, Soros is the one responsible for ISIS’ terror brigades throughout the West, a fact that’s been blurred by Soros’ persistent psychopathy in blaming others for his own actions.

In a recent propaganda piece published by The Guardian, Soros went off on Putin for his alleged actions in fueling ISIS, claiming that “Putin is a bigger threat to Europe’s existence than ISIS.” Soros claims that Putin is directly responsible for all the turmoil in Europe right now, and nastily suggests that Putin, who is actually the only world leader currently addressing ISIS’ presence in Syria with any sort of objectivity, is somehow just as guilty as ISIS in wreaking havoc throughout the world.

Soros, not Putin, the true purveyor of ISIS terror

Condemning such nonsense, Gerrans picks apart Soros’ claims by correctly pointing out that Soros is the real mastermind behind the ISIS phenomenon, which is being used as a catalyst to destroy Western Europe and, eventually, the U.S. And by blaming Russia and Vladimir Putin for this, Soros is demonstrating clear signs of psychopathy, of which the rest of the world needs to take notice.

“Soros and his ilk created and benefit from what Soros calls ‘Islamic State,’ yet his argument not only disregards that fact, it kicks blame in the direction of the one major power – Russia – which has taken steps to deal with this US creation,” Gerrans wrote.

Russia, Gerrans correctly points out in his analysis, is working alongside Syria’s legitimate government to fend off ISIS and maintain its national sovereignty, something for which the U.S. has paid lip service with no action. What Soros claims concerning Russia’s involvement in the conflict is the exact opposite of what Russia is actually doing, in other words, and the true liar in all this is none other than Soros himself.

“This invasion is driven, on the one hand, by people smugglers, and on the other hand by those activists who support everything that weakens the nation-state,” said Hungarian Prime Minister Viktor Orban, as quoted in an article published by the Daily Mail last fall that condemned Soros for destabilizing Europe by ordering the European Union to take in “at least a million” refugees a year.

“This Western mindset and this activist network is perhaps best represented by George Soros.”

Gerrans’ friend and fellow journalist Gearoid O. Colmain agrees, having explained in a separate interview with RT.com that the entire “War on Terror,” ISIS and all, is the creation of a “tiny and particularly tyrannical ruling elite,” of which George Soros seems to be a leading member.

“There is no War on Terror,” Gearoid O. Colmain told RT.com. “There is a war which is being waged using terrorist proxy groups and they are being used against nation states who are resisting US and Israeli hegemony.

“And they are also being used as a means of disciplining the work forces in Europe. In a period of mass unemployment and austerity, you now have terrorist attacks being committed by terrorists funded, armed and trained by Western intelligence agencies. There is no such thing as ISIS. ISIS is a creation of the United States.”

Soros’ psychopathic tendencies and continued denial of his own role in furthering ISIS terrorism proves that this one-foot-in-the-grave scumbag is the true enemy of the people, not Vladimir Putin or Russia. Gerrans puts it succinctly when he writes:

“Soros disregards entirely his own extensive role in creating the problem he purports to seek to solve; meanwhile, he accuses Russia, the only country to man-up to the war on Syria, of being behind the ‘migration‘ Soros has spent millions engineering.”