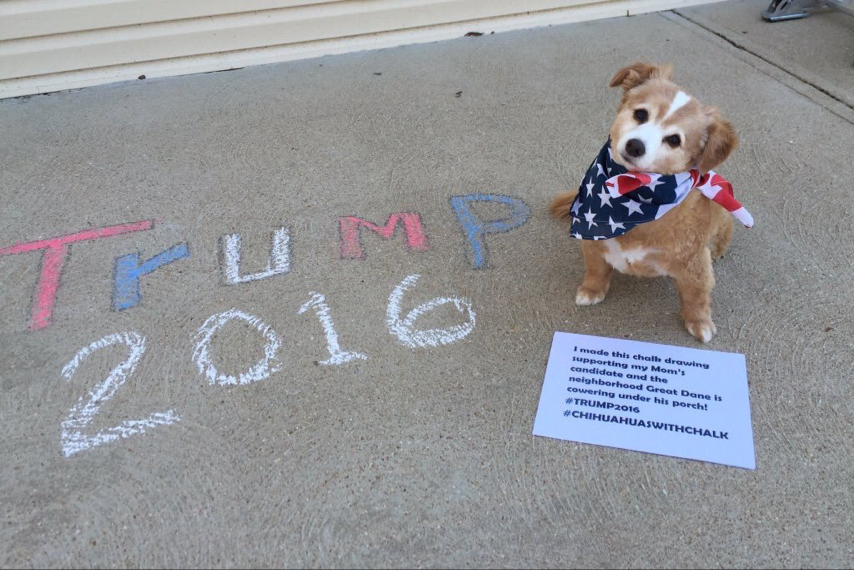 (Freedom.news) Republican students at DePaul University who support leading GOP contender Donald Trump have had enough of the authoritarian political correctness being forced upon them by school administrators: They plan a little rebellion of sorts by refusing to be silenced by the Stalin-wannabes who run the place.

As reported by AMI Newswire, DePaul University administrators told college Republicans in April to “put down that chalk” after students claiming their fears were “triggered” charged that the Republicans’ sidewalk chalked messages in favor of Trump and other Republican causes amounted to hate speech. But, in the spirit of cowboys thrown from their horses, now the Republicans say they will write again.

As part of a national College Republican event called “the chalkening,” DePaul Republicans had chalked slogans in the courtyard including “Trump 2016”; “The wall: Build It”; “Blue lives matter”; “Stand with Israel”; “Don’t feel the Bern”; and “Hill no!”

“Everything we wrote and where and how we wrote it was in guidelines with university policy as stated by the university,” Nicole Been, chair of the DePaul Republicans, insisted to AMI Newswire.

To DePaul’s Black Student Union, however, this was beyond the pale.

They “felt as though we were being racist and xenophobic in particular to the black students and the undocumented students” said Been. BSU members complained to the administration that this chalking amounted to a “hate crime.”

DePaul responded first by sending out the university grounds crew. They erased many of the messages or partially erased them and thereby changed their meanings. “Don’t feel the Bern” became “Feel the Bern,” for instance.

Then DePaul banned all political chalking. The administration cited concerns about student welfare and advanced the argument that allowing political chalking by students could put the university’s tax status in jeopardy.

The Black Sheep, a non-partisan university satire publication, published a piece mocking the speech restrictions by speculating about what chalk messages would not run afoul of the new policy. Candidates included “DePaul is a school”; “Han dies!”; and “killing people is generally considered to be wrong.”

DePaul economics professor Michael Miller told AMI that while he was “not involved in the actions of students who did the chalking,” that their “actions are clearly protected speech and thus should not be infringed by the university.”

Miller found the charge that chalking political slogans amounted to hate speech “preposterous,” and reminded that “even if it were hate speech, hate speech is protected by the First Amendment.”

Several employees of DePaul’s office of student involvement ignored multiple requests for comment by AMI, as did the Black Student Union and university Media Relations head Carol Hughes. Michael Lynch, the BSU member Been said had been “the most outspoken” and “our biggest critic,” told AMI “no comment.”

Asked if the students who oppose the university’s new political speech-stifling policy with a “chalk-in” or some other protest, Been said, “We are working on ways to get around the new policies and working with administration to have a better understanding of the rules while making sure our first amendment rights are protected. We plan to chalk again.”

Which is as it should be. Part of Trump’s rise and popularity is his opposition to political correctness and his refusal to bend to the will of would-be tyrants who think their speech is the only speech that is protected by the Constitution’s First Amendment.