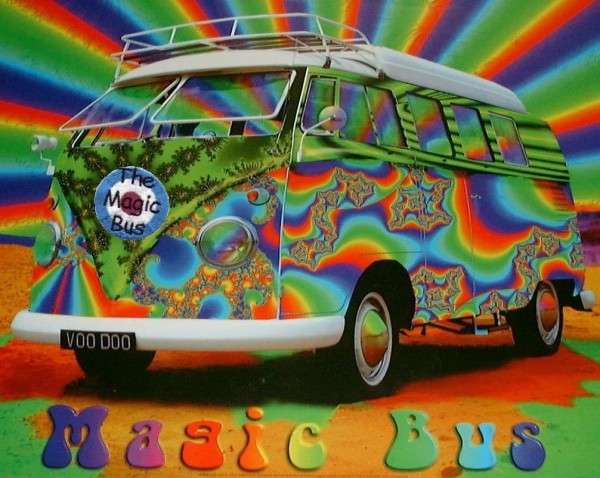 Since 2012, the Maryland Transit Administration (MTA) has been recording passenger’s private conversations. The buses were retrofitted in 2012, without the knowledge or approval of the legislature:

“Nearly 500 of its fleet of 750 buses now have audio recording capabilities. Officials say the devices can capture important information in cases of driver error or an attack or altercation on a bus.”

“I find it outrageous. I don’t want to overstate it, but this is the issue of our generation. As technology advances, it becomes easier and easier to encroach on people’s civil liberties.”

Before we take a brief look at the dissolution of our inalienable rights, let us fondly remember when Homeland Security didn’t exist and busses were, well, magic.

Oh for those days of late 1960’s ignorance. Alas, the mechanisms that have evolved into today’s present police state were woven eons before The Who professed the teenage angst of their generation. Indeed, the idea of framing a name to market to an entire group of folks birthed in a particular era, started with the novelist Gertrude Stein, according to Time magazine:

“[Stein] reportedly first coined the term the Lost Generation to describe the people who were born roughly between 1880 and 1900 and who had lived through World War I.”

Subsequent to Stein’s naming of the “Lost” was the “GI/Greatest” the “Silent,” the “Baby Boomers,” “Gen X,” “Gen Y”  and now we have our “Millennials.” There is also a lively discussion about what moniker to give the next batch of mass birthed Americans:

“For this latest generation, Gen Z and Founders are just two of many names in the running for this post-millennial group, including iGen, Homelanders, Plurals, Posts, ReGen, and now, Founders.”

So what, you may be asking, does this have to do with the State of Maryland’s action to record passenger recordings on public busses? Quite a bit. Those of you with a few wrinkles already know this.

Each generation gets targeted with very specific political, social, educational, religious, philosophical, economical and environmental constructs. The War on Poverty engendered more poverty. The War on Cancer created more cancer. The War on Drugs delivered more drugs. The War on Terror? You get the picture. Along with these “wars,” many other memes were woven together to manipulate America’s population to it’s current disposition; dependence, obesity, fear and loathing.

It’s mind-boggling to realize that it was a mere 33 years from the Who’s “Magic Bus” to 9/11. And it’s been only fifteen years since that day of infamy to now. You may have been one of the Boomers, or the Greatest or an X shouting from the rooftops about how 9/11 and the subsequent assault on our inalienable rights looked a whole lot like the Rheichstag Fire.

Nonetheless, the beast has marched on. And here we are.

Maybe some folks riding Maryland’s public transportation busses don’t mind. After all, they’re not saying anything that would target them as a terrorist. Not yet. This nation is far past the slip of the slope labeled free speech annihilation.

But there’s been a smidgen of pushback, according to the Baltimore Sun:

“The [Maryland] State Senate gave preliminary approval Wednesday [3.2.16] to a bill that would limit when passengers’ conversations can be recorded on public buses and trains.  The legislation would ban that type of ‘indiscriminate mass surveillance’ of transit riders, said Sen. Robert A. Zirkin, a Baltimore County Democrat who chairs the Judicial Proceedings Committee.”

Keep in mind it said “preliminary approval.” Sandy Arnette is a spokesperson for the MTA. She’s concerned:

“Arnette said the bill “prohibits a proven, effective public safety tool and puts students and all MTA riders at greater risk.” She said the MTA was not consulted on the changes that were made to the bill.”

Neither were the citizens when the recordings first started.