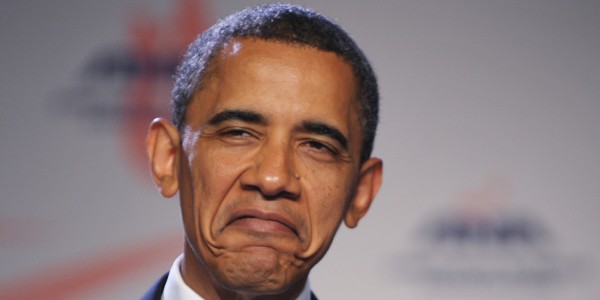 President Barack Obama has managed to set another milestone during his tenure: He has presided over the greatest accumulation of government debt in the history of the country. What’s more, with help from a spendthrift Congress, his record of excess is only going to go higher.

As reported by The Blaze, the national debt has now passed $19 trillion for the first time ever, and as you can see by this online tracker, it’s not coming down anytime soon. In fact, U.S. debt rises by tens of thousands of dollars every second.

Rising debt, according to then-Sen. Barack Obama during his first presidential campaign, was not only a knock on his predecessor, then-President George W. Bush, but an “irresponsible” and “unpatriotic” thing to do to the country, he states in this video from 2008.

“The problem is, is that the way Bush has done it over the last eight years, is to take out a credit card from the Bank of China in the name of our children, driving up our national debt from $5 trillion for the first 42 presidents, where 43 added $4 trillion by his lonesome so that we now have over $9 trillion of debt that we are gonna have to pay back,” he said at a campaign event in Fargo, N.D., broadcast by CNN. “That’s $30,000 for every man, woman and child. That’s irresponsible. It’s unpatriotic.”

That was then, of course; Obama, under his watch, has doubled down on the debt, actually doubling it over the course of his two terms. Granted, he had some help from Congress, but so did Bush, of course. But both, as presidents, sign budgets that Congress sends, so it’s appropriate to primarily lay these huge debts at their feet.

In this current election cycle, the issue of the out-of-control national debt is once again front-and-center, but mostly among Republican candidates. In fact, spending cuts have been a policy cornerstone for several of the prospective GOP nominees, some of whom have championed spending reductions as serving members of Congress. By contrast, however, the two Democrat candidates – socialist Sen. Bernie Sanders of Vermont and former U.S. senator and Secretary of State Hillary Clinton – have called for dramatic spending increases for new public programs like free college, free healthcare for all and other benefits. They claim those would be paid for by boosting taxes on workers, especially wealthier earners, but most economists who are serious know those plans are losers because at some point over-taxation becomes a negative revenue stream for the government as “the wealthy” leave the country or find other ways to hide their earnings.

But current fiscal policy granted by Congress has allowed the federal government to engage in unlimited borrowing (along with virtual unlimited printing of money). What’s more, any brakes Congress attempted at one point to apply on its spending habits have been removed.

As The Blaze reported:

Several years ago, Congress passed legislation to increase the debt ceiling to a certain level, which required spending to stop once that threshold was reached. But, rather than reign in spending, Congress has instead suspended the debt ceiling, allowing for more borrowing until that suspension ends.

Also, there has been no shortage of accounting tricks employed by Congress and the Treasury Department. In November 2015, for example, the maximum debt limit was suspended after the debt had been frozen at $18.1 trillion for several months. This can be seen when viewing the online debt ceiling tracker, U.S. debt never stops accumulating – so how was it that it “froze” for several months, according to official government figures?

After the freeze thawed and the debt limit suspended, the debt ballooned $339 billion in a single day.

At present the debt ceiling is suspended until March 2017, which means the government can borrow and spend an unlimited amount of money – which it is sure to do.

As for Obama, by the time he packs up and moves out of 1600 Pennsylvania Ave., the national debt is expected to be hovering around $20 trillion, if it hasn’t surpassed that level by then.

That’s not just “irresponsible” and “unpatriotic,” it is criminal.