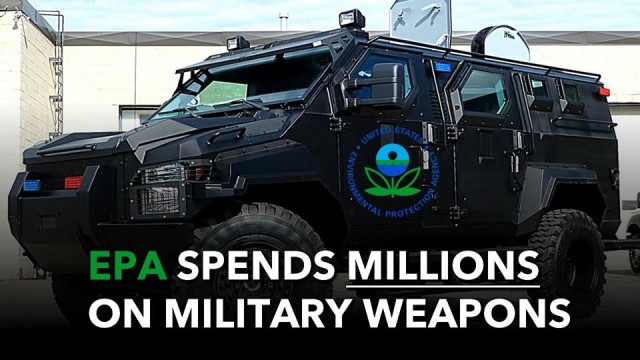 I worked for a county government agency for a short period of time. Even at the minuscule local level, the experience gave me a visceral example of governmental waste. Before the end of the fiscal year, it was policy to spend every single penny in a budget, even if nothing was needed. And nothing could be saved, or “put back.” Because if the bureaucrats didn’t spend it, they opined, they would get less money for the following fiscal year. From $5 to $50,000, it was to be spent and that was that. So much for balancing a budget, or as the Inspector General of the EPA calls it, “deobligating” funds that aren’t needed anymore.

“The Environmental Protection Agency has nearly $3 million tied up with contractors that have not done any work for the agency in a year and a half, according to a new audit.

“‘We performed this audit to determine whether the U.S. Environmental Protection Agency (EPA) has adequate controls in place to identify and deobligate unneeded contract, purchase and miscellaneous obligations… and to determine the potential dollar amount of obligations that could be deobligated,’ the audit said. ‘An unliquidated obligation can be described as an obligation or liability that has not been outlaid, expended, or liquidated.’

“‘If the final payment request has been received and the obligation is fully satisfied, the obligating official should request a deobligation of any remaining funds in the agency’s financial system.’

“The audit identified $583,875 set aside for purchases on contracts that have had ‘no activity in the last 18 months,’ and estimated an additional $2,962,058 could be saved through closing other contracts.”

Let’s hope the extra three million they could use for other items won’t be spent building up the paramilitary arm of the Environmental Protection Agency. Linc Austin reports:

Imagine your twelve year old coming home from the public prison pipeline school system to tell you that your home has too many windows and he’s going to turn you in to the environmental police. Or your organic food bed and breakfast that you’ve operated successfully for fifty years is now located on a newly named boundary of a World Wild Life Fund protected biosphere for some endangered nonhuman species and you’ll just have to take what you’re offered. Like what Gold King mine owner Todd Hennis told the Denver Post after his property’s run in with the EPA:

“How would you like to own a property, have EPA come take it, and then try to take it over permanently? A lease agreement is the way we do it in America — rather than have the government come in and expropriate property.”

Well, that’s the way we used to do it in America. So why is the EPA keeping millions of dollars in their pockets? Simple answer. That’s government bookkeeping as usual. But the EPA’s increase in weapons and power? This is recently fascist. The United Nations and EPA and the Pope are all in for Agenda 2030. Has the world gone mad, believing that our Co2 out bound breath, which yields the Hebrew word, ‘”Wah” (translated as wisdom, she, her) causes global warming? What about the sun? Man is a carbon based life form and has Satan wanting to kill, steal and destroy it. Thus, we have Climate Change. Believe it; Obey it; Or else. Will they tell you what to speak and what food to eat and how many CO2 units you can use for your heat? Wake up from your slumber, all who are asleep. As for me and my house, we will serve Yahwah.