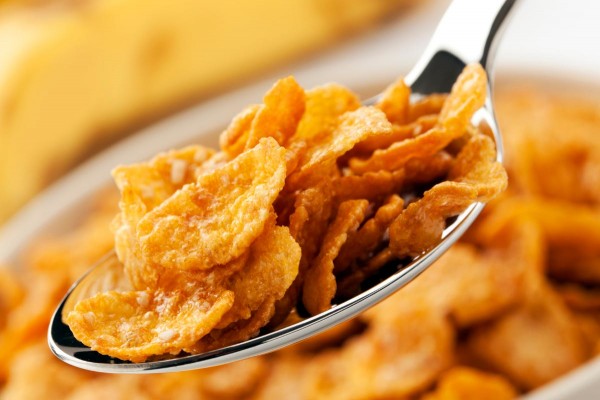 One of the most GMO-infused foods on the market today is breakfast cereal, which means that Big Food, in cahoots with the world’s largest producer of genetically modified organisms – Monsanto – have little regard for the overall health of our children, by far the largest consumers of breakfast cereals.

As noted by NaturalNews editor Mike Adams, the Health Ranger and author of revealing new book, Food Forensics, brands that contain GMO corn are some of the most dangerous, as highlighted by recent research linking Monsanto’s GMO corn to cancer tumors and an increase risk of premature death in both men and women.

However, as usual, the mainstream media has remained largely silent regarding everyday foods being sold in grocery stores right now containing Monsanto’s GMO corn. To answer the question of which cereals were most infused with GMO corn, Adams did a little detective work at a local supermarket in Austin, where he’s based. He bought 10 breakfast cereals that were manufactured with high levels of non-organic corn.

“According to the Center for Food Safety, up to 85% of the corn grown in the United States is genetically modified. This means corn-based cereals that use non-organic corn have a very high likelihood of containing GM corn,” he reported.

In assembling his list of the top 10 most popular GMO-corn-containing cereals, Adams noted that none of them in 2012 – when he conducted his research – claimed that they were GMO-free or that they were made using organic corn.

“The exact GMO content of these cereals remains a mystery precisely because manufacturers of these cereals refuse to label them with their GMO content,” he said, nothing that the lack of disclosure “underscores the urgent need for a labeling law so that consumers can make an informed decision.”

As a legal matter, Adams noted that “in no way” was NaturalNews claiming that the cereals would cause cancerous tumor growth or that they posed an immediate health risk. “Breakfast cereals made with GM corn may turn out to pose a significant long-term risk to human health, but that has not yet been determined,” he said.

The 10 popular cereals most likely to contain GMO corn were (in no particular order):

At the time, Adams noted there was only one brand he could find that was manufactured with organic ingredients – Nature’s Path, which is 100 percent non-GMO as well.

“Many ‘natural’ brands that appear to be healthful and natural are actually not organic or GMO-free,” he wrote. “For example, ‘Barbara’s Bakery’ cereals are not organic. Although they are positioned in store shelves alongside other organic cereals, they are actually made with conventional crops grown with pesticides which may include Monsanto’s Roundup.

“You may also notice that most of the cereals most likely to contain GM corn are children’s cereals. It is the children in America who are being fed the most GMOs,” he continued. “This represents a highly unethical food experiment being conducted on an entire generation, and the long-term effects of human consumption of GMOs are simply not known.”

With so much manipulation of our food chain, there can be no doubt that we are due for a Food Revolution.

Beginning April 30 and running through May 8, you can take part in the 5th Annual Food Revolution Summit, available FREE online (sign up here).

“Our world is in desperate need of a food revolution. Pesticides, hormones, antibiotics, GMOs, and untested chemicals are spreading like a virus through our food supply. The health of your family and friends, as well as our planet, is at risk,” says the summit web site.

If you’re interested in getting informed and empowered, and if you want to find out how you can prevent heart disease, cancer, diabetes, fatigue, poor sleep and other health challenges — with food – then make plans to participate for FREE in the 5th Annual Food Revolution Summit. Sign up now.