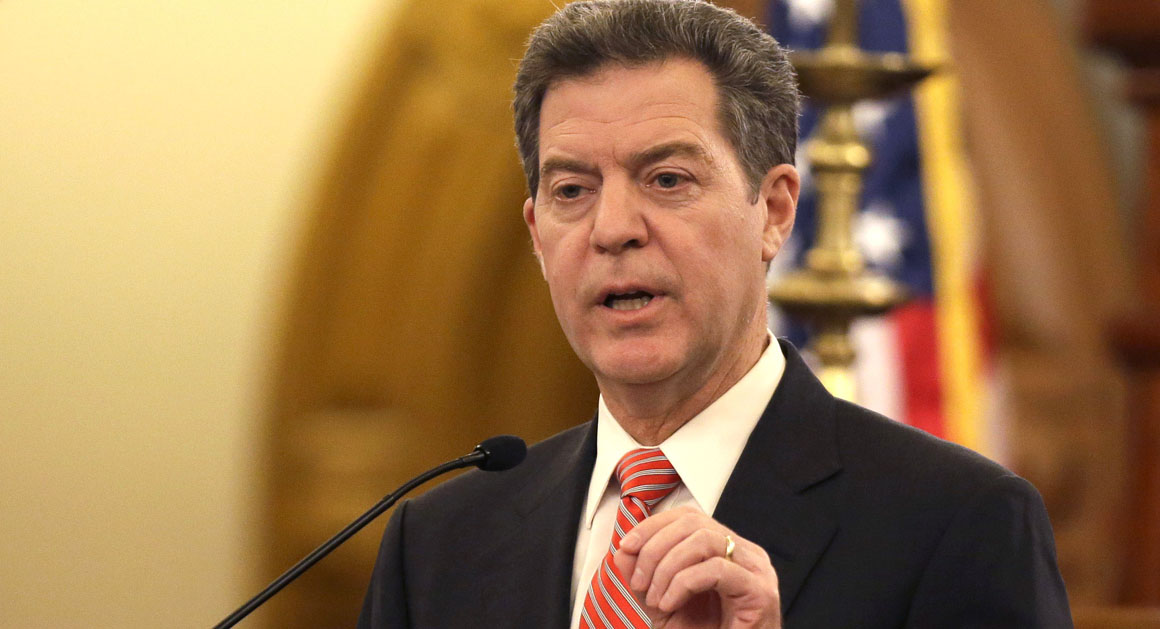 (BigGovernment.news) Kansas Gov. Sam Brownback has doubled down on his stand against tax increases despite growing criticism from even formerly ardent supporters, arguing there is little use in having a debate about raising rates for small businesses — or anyone else.

Gov. Brownback made the statement last week after the publication of revised revenue estimates that predict the state will bring in some $228 million less than what was previously projected just months ago.

He said tax hikes remain a bad option for closing the budget gap.

“Instead, we will focus our support and attention on controlling government spending more efficiently.”

In total, the state will have to find, or cut, close to $300 million this year and next if the budget is to be balanced, according to the Consensus Revenue Estimating Group.

The figures, prepared for the group by the non–partisan Legislative Research Department, may add to the growing chorus of voices in the state, including Republicans, calling for a repeal of a tax break for small businesses and farmers.

Gov. Brownback radically overhauled the tax system in 2012 and 2013, cutting individual income taxes and getting rid of all taxes on income from certain businesses, including limited liability companies and farming.

Around 330,000 business people and farmers in the state have benefited from the tax exemption, but it is estimated to reduce revenues by $200 million to $250 million a year. So far, the expected job growth has not materialized: In the 12 months through the end of March 2016, employment was flat.

Republican lawmakers, due to gather for the Kansas State Legislature’s veto session next week, are proposing a rollback of the business tax exemption. Senate Vice President Jeff King, R-Independence, has introduced Senate Bill 508 to do just that. It is slated for committee consideration April 28.

“I’m open to any approach that restores fairness to the tax system and helps us recover some of the taxes lost through the LLC loophole,” King told the Kansas City Star.

Sen. Jim Denning, R-Overland Park, surprised many in the state and beyond when he declared recently that it was “signaled already to me personally” that Brownback would not veto a rollback of the tax exemption.

But following Brownback’s definitive statement that there is little point in a debate over tax increases, any rollback looks much less likely. The governor said he wants the legislature to work on three options drawn up by his budget director, Shawn Sullivan, none of which includes any rollback on the tax cuts.

The first option proposed by the governor is to reduce sales tax revenue going to the state highway fund, which would lead to the transfer to the general fund of $70 million this year, and $115 million in 2017.

In addition, he wants to cut funding for state universities, and sell bonds using future monies from the master tobacco settlement as collateral. This would bring in a one-time windfall of $158 million in 2017.

But the settlement money was earmarked for early childhood education. That funding will remain at $42 million per year, the governor said.

In the second option, in addition to transferring sales tax from the State Highway Fund, the governor would delay making 2016 fourth-quarter payments into the state public employees pension fund.

The final option also includes the transfer of sales tax, but the legislature would pass a budget reducing expenditures across all agencies by three to five percent.